“The Power of One Dram” is 2 years old. More than 82 million drams were allocated for various initiatives 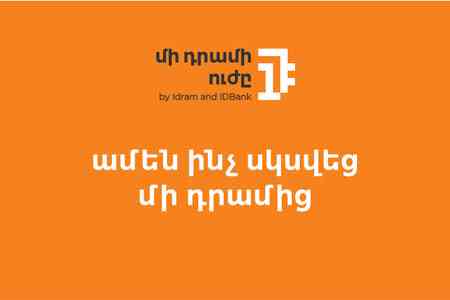 ArmInfo.Two years ago, on June 8, the Internet was flooded with the following phrase: "Everything starts from one dram". It was not clear what that meant ․․․ A few hours later, Idram announced the launch of the initiative “The power of one dram”, noting that from that day on, the company would transfer 1 AMD to the initiative for any payment, made through the Idram payment system.

At the beginning not everyone believed

According to the director of the Idram Arsen Kdenyan, at the beginning of the program, not everyone believed in its success. “Both our clients and beneficiaries were skeptical, they probably thought what just one dram could change. The amount that was accumulated during our first initiative was really small: in three months we donated a total of about 5 million. It is noteworthy that IDBank joined us just two weeks after the launch of the program, which, of course, gave an additional impetus to the initiative.”, -said Arsen Kdenyan.

Chairman of the Board of IDBank, Mher Abrahamyan, notes that the Bank joined the “Power of One Dram” program, as they believed that this power really exists. Besides, they believed that by joining the initiative, the strength will be doubled.

The key to success

“I think the success of the program is the fact that our customers only by paying with Idram, do not spend any extra money from their own funds. One dram is provided by Idram and IDBank. We are glad that in 2 years we have managed to be useful to various foundations operating for our country, which have a great contribution in the fields of health, defense, environment, education. "We have transferred more than 82 million AMD and we continue our mission,"- says Mher Abrahamyan.

"The Power of One Dram" will be continued?

Of course, IDBank and Idram will continue the "Power of One Dram" initiative. Moreover, they will announce a new impetus for the program soon. According to Tatevik Vardjanyan, head of IDBank's communications department, currently the beneficiary of One Dram is “Children of Armenia Foundation” at the Smart Center of which more children will receive the necessary knowledge.

In July, QaylTech, which created a unique Armenian innovative product - the MetaGait device, will become the next beneficiary of the “Power of One Dram” initiative. "MetaGait" helps soldiers with disabilities, children with cerebral palsy regain mobility, preventing more than 30 diseases caused by immobility. The "MetaGait" fundraising project has been launched on "reArmenia" platform, the goal of which is to produce 35 "MetaGait" at cost price, which will be used by 97 beneficiaries. Idram and IDBank will contribute to the production and supply of at least two "MetaGait" devices due to the initiative the "Power of One Dram".

The power of one dram has provided funds to the following charities since its inception:

Continue making all your payments through the Idram&IDBank application, the IDBanking.am online platform, Idram.am website, or through the terminals of the companies, become goodwill ambassadors and we will continue transferring 1 dram for each of your payment to the iniciative “The power of one dram”.

Through the Idram&IDBank application, you can make payments at more than 10.000 points of sale and in more than 900 online stores and for 400+ services included in the system.

But everything started from one dram…