Ensuring food security remains one of the most important tasks for  the EAEU countries in the context of the challenges: Pashinyan 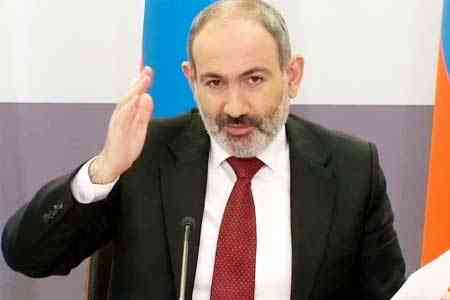 ArmInfo.The Eurasian Economic Union is gradually completing the stage of formation and moving into the stage of unlocking its integration potential in the interests of  creating a common economic space, sustainable economic growth,  strengthening competitiveness and effectively promoting its economic  interests in the international arena. Prime Minister of Armenia Nikol  Pashinyan stated this on June 21 at an expanded meeting of the  Intergovernmental Council of the EAEU countries in Minsk.

According to him, taking into account the new realities, there is a  growing need to increase the close coordination of the EAEU member  countries and actions as a foundation for the adaptation of the Union  states to the modern conditions of the global economy. "In the  context of modern economic challenges, one of the most important  tasks remains to ensure the food security of our countries. At  present, due to objective reasons, there are restrictions in the  supply of certain types of agricultural products on the common  agricultural market, which may adversely affect the stable  functioning of agriculture in our countries, and, in general, the  food supply of the Union", the head of the Armenian government said.

As he noted, in this regard, that the EAEU states need, first of all,  to counteract risks on a collective basis, using the potential to  develop consolidated and acceptable solutions to all parties,  minimizing the possibility of food shortages.

Pashinyan noted that the cooperation of the EAEU countries within the  Union is a priority area that allows building up traditional  cooperation and creating new partnerships in order to realize the  economic potential of the Union. "In this context, for the purpose of  functioning of the Union's single market, I consider it important to  remove obstacles in intra-trade, form new logistics chains for export  and import, develop import substitution and further improve business  conditions," the head of the Armenian government emphasized.

Referring to the experience of recent years, Pashinyan noted that a  significant part of the obstacles faced by business is the result of  the lack of unified, coordinated and systematic rules of activity.  "Only readiness for cooperation, dialogue, openness and transparency  can help maintain positive dynamics in this issue," the Prime  Minister of Armenia said, emphasizing the importance of forming a  single market for alcoholic beverages,.

Pashinyan also stressed that taking into account the lack of common  borders with the EEU countries, the digitalization of the economy  will save time and material resources for Armenia. Logistics is one  of the areas requiring digital solutions. In this context, the head  of government pointed to the need to develop transport  infrastructure, establish multimodal centers and Eurasian transport  corridors. "The Armenian side attaches importance to the development  of dialogue and cooperation with China in the implementation of the  One Belt One Road strategic initiative", the Prime Minister of  Armenia stressed.