By announcing the upcoming increase in the minimum wage and pensions,  the authorities may increase inflationary pressure - Former head of  Central Bank 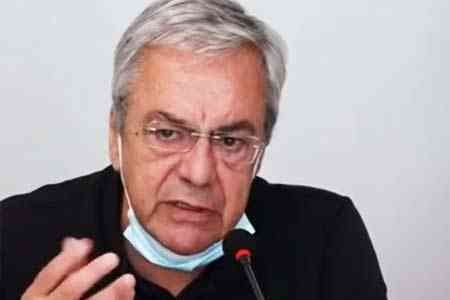 ArmInfo.Former chairman of the Central Bank, economist Bagrat Asatryan sees positive prerequisites for ensuring the 7% GDP growth planned by the state budget. He stated  this in an interview with the RFE/RL's Armenian Service.

Nevertheless, referring to the preliminary data of the Statistical  Committee, according to which, in January- May 2022, economic  activity amounted to 10.2%, Asatryan urged to understand whether this  increase is of a long-term nature and whether it is due to the growth  of the main sectors of the economy.

As the economist pointed out, the main driver of this growth was the  service sector (by 24.9%), which was due to the Russian-Ukrainian  crisis, anti-Russian sanctions, which led to an increase in the  number of visitors to Armenia and the relocation of Russian IT  specialists to the RA. Meanwhile, the growth of the industry sector  is extremely insignificant - 2.7%, which not only does not contribute  to economic growth, but is also a restraining factor. The  construction sector grew by 11.4%, but it could be the locomotive of  economic growth, if it were not for the underperformance of capital  expenditures, which has become a tradition for Armenia, he noted.

The growth of Armenia's foreign trade turnover in January-May 2022  amounted to 36.6%, while exports increased by 27.5%, which may also  be of a temporary nature - as a result of Western sanctions and the  revaluation of the Armenian dram.

The expert expressed concern about 12-month inflation, which reached  9% in May. By announcing the upcoming increase in the minimum wage  and pensions, according to the economist, inflationary pressure may  be increased. <I am not encouraged by such statements. In our  conditions, when inflationary pressure is high, it would be more  correct to implement targeted social programs>, said the ex-head of  the Central Bank.

Yesterday, at a government meeting, Minister of Finance of Armenia  Tigran Khachatryan said that by the end of 2022, Armenia will ensure  the GDP growth rate of 7% included in the state budget. Armenian  Prime Minister Nikol Pashinyan, in turn, said that from January 1,  2023, pensions, the minimum wage and childcare benefits will be  increased. According to him, they plan to increase the minimum wage  to 75,000 drams from the current 68,000. Benefits for caring for a  child up to two years will increase from 28,600 to 30,700 drams  (34,000 drams for working mothers), regardless of whether the mother  works or not. At the same time, in rural areas, the allowance will be  paid in a double amount - 61,400 drams, the prime minister said.