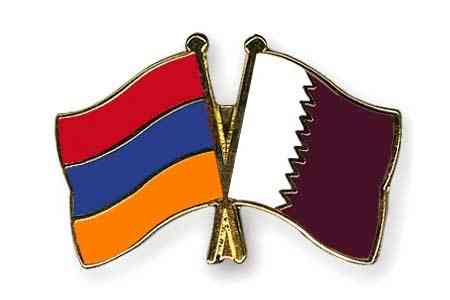 ArmInfo. Armenia and Qatar discussed possible areas of bilateral cooperation. This was reported by the press service of the Ministry of Economy, referring to the  results of the meeting held in Doha between Deputy Minister of  Economy of the Republic of Armenia Narek Teryan and Abdulaziz Nasser  Al-Yafei, Deputy Executive Chairman of Hamad Port.

According to the source, the parties also discussed the possibility  of making Qatari investments in the Armenian market.

According to 2021 data, Hamad Port's share of Middle East trade is  27%. In the coming years, it is planned to increase that figure to  35%. The Port has more than 15 direct cargo routes and a working  network of more than 40 ports on three continents. The Port's  capacity is 7.5 million 20-foot containers. The Port will also be  connected to the Al Majd highway network and a long-haul rail link  under construction.

According to the RA Customs Service, in 2021, Armenia reduced exports  to the Qatari market by 64% to $1.8 million. At the same time, import  volumes increased by 9% per annum, amounting to $381.8 thousand