Pashinyan hopes that Moscow will regard relocation of Russians as  movement within EAEU: Putin sees nothing wrong with this 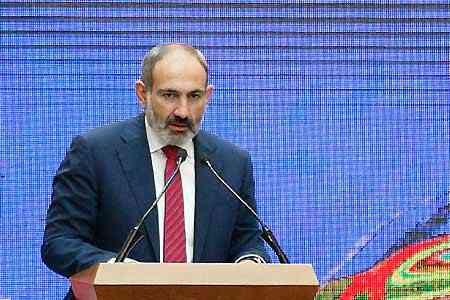 ArmInfo.Russian relocators have greatly helped out and are helping out the Armenian economy, and they are very welcome in the RA. Armenian Prime Minister Nikol

Pashinyan stated this on September 7 at the plenary session of the  Eastern Economic Forum in Vladivostok, commenting on the "influx of  labor migrants" to Armenia.

As Pashinyan noted, many Russians relocated to Armenia, since at this  stage there were difficulties with bank transfers, and they need to  receive salaries from foreign companies. He hopes that Russia itself  will regard the relocation of Russians as movement within the EAEU.

The head of the RA government noted that in January-February, high  economic growth was already observed in Armenia, in March there was  concern, and "flows from Russia to Armenia helped a lot and they are  continue to help and which is a very encouraging fact."

"We are in constant contact with our Russian partners, there are  areas that can be developed together, there is good dynamics, and  there is also the interest of Russian regions in joint work with  Armenian partners," he said.

Pashinyan stressed that even if Armenia theoretically falls under  sanctions, it will be unprofitable for Russia. "Therefore, we propose  to cooperate, to use opportunities competently, to notice threats  that concern not only Armenia, but also the EAEU, in order to manage  and neutralize them," he said.  According to Pashinyan, more than  once during the discussions he drew the attention of his Russian  partners to the fact that the likelihood of relocators returning to  the Russian Federation from Armenia is many times greater than from  France or the United States.

Russian President Vladimir Putin, in turn, sees nothing wrong with  the fact that Russian companies have decided to deploy in Armenia.  "We welcome everything that benefits Russian business. If the  conditions are such that now it is expedient and profitable for  people, and these are mainly IT specialists, to work there, then for  God's sake. Let them work>,  the Russian president said.  Putin added  that Armenia is not an alien country to Russia. <Everything is  nearby. You can work in Yerevan and live in Moscow>, he said.

At the same time, according to him, many people have already  returned, realizing that nothing terrible is happening, despite the  sanctions - everything works, functions and everything is stable. At  the same time, as the Russian leader pointed out, everything related  to the EAEU countries is easier for Moscow to regulate, and it is  easier for people to work, <these are obvious things>.