Central Bank of Armenia raised refinancing rate from 9.5% to 10% 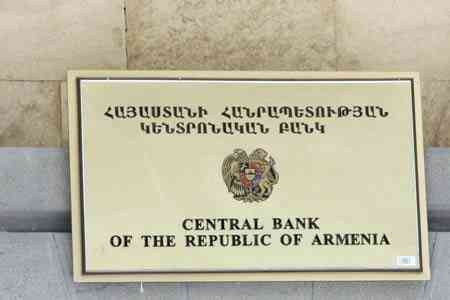 ArmInfo. At September 13, 2022 meeting, the CBA Board decided to raise the policy rate by 0.5 percentage points setting it at 10%, the press service of the Central  Bank of Armenia told ArmInfo.  According to the source, "In August  2022, 12-month inflation decreased to 9.1% at the end of the month.  12-month core inflation continued to grow reaching 10.2%.

In the third quarter of 2022, low economic growth and high inflation  continued to sustain in the main partner countries of Armenia. The  central banks of advanced countries will continue to conduct  contractionary monetary policy. This will be reflected in the  tightening of global financial conditions and in slowing of economic  activity. Subsequently, a certain drop of prices will be observed in  the international commodity markets, contributing to the gradual  easing of the global inflationary environment. Hence, it is expected  that inflationary effects from the external sector will subdue.   During the third quarter of 2022, high economic activity continued to  be observed in Armenia. It mostly is witnessed in services and  construction sectors. Positive developments continue in the export  sector as well. High economic growth is predominantly driven by the  demand factors. Again, its main contributors are the significant  influx of international visitors and remittances. High demand  contributes to the expansion of the inflationary environment and  persisting high inflationary expectations.

In the current situation, the Board finds it appropriate to raise the  policy rate. Relatively contractionary monetary policy and dram  appreciation will gradually contribute to curbing demand and reducing  inflationary expectations. The CBA Board is consistent in taking  adequate actions to stabilize inflation and to offset any risk of  deanchoring of inflation expectations and. In line with the outlined  monetary policy scenario, the 12-month inflation will gradually  decline and from the end of 2023, will stabilize around the 4%  target.  The CBA Board considers that the risks of inflation  deviation from the projected trajectory are mainly balanced.  Should  the risks materialize in any direction, the Board stands ready to  respond accordingly in fulfilment of the price stability objective."

It would be appropriate to recall that the forecast of the Central  Bank, updated at the end of June, foreshadowed inflation at the level  of 8.5% for 2022 (against the actual 7.7% in 2021), with the target  of 4% approaching in 2024. Moreover, the forecasts of the Central  Bank in comparison with the March version of the report has changed,  in particular, in terms of inflation, instead of the previously  expected 6.6% in 2022, the updated June version has a higher level of  8.5%, and the predicted GDP growth, on the contrary , improved from  the previous 1.6% to the updated 4.9%. It is appropriate to note that  the June 2022 forecast reflects new challenges against the background  of the Russian-Ukrainian military-political conflict and  comprehensive, unprecedented, large-scale US and European sanctions  against Russia, the share of which dominates in the main  macroeconomic indicators of Armenia. In September, the Central Bank  plans to update its forecasts.