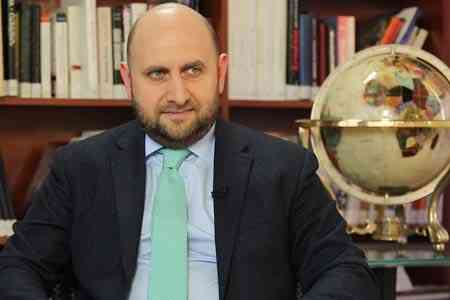 The rationale notes that in the Q3 of 2022, trends of low economic  growth and high inflation continue in the main partner countries of  Armenia. The central banks of developed countries will continue to  pursue a restrained monetary policy, which will result in tightening  global financial conditions and lead to a slowdown in economic  activity in partner countries. As a result, the international  commodities market will experience some reduction in prices, which  will contribute to the gradual mitigation of the global inflationary  environment. Thus, the inflationary impact from the external sector  on the Armenian economy is expected to weaken.

The Chairman of the Central Bank noted that in the Q3 of 2022, the  Armenian economy continues to experience high activity, which is more  observed in the service sector and the construction sector. "Positive  trends continue in exports. The influence of demand factors is the  main trigger of high economic growth rates. The latter is still due  to a significant influx of international visitors and a surge in  incoming remittances. High demand contributes to the expansion of the  inflationary environment and the maintenance of high inflation  expectations," he noted, stating that the official annual inflation  in Armenia in August reached 9.1%, and the core annual inflation  reached 10.2% (from annual inflation 8.8% and 8% respectively in  August 2021 - Ed. note)

In this situation, the Central Bank Council considered it appropriate  to raise the key rate (by 0.5 percentage points to 10%). Galstyan  said that a relatively tightening monetary policy and the  strengthening of dram will gradually help curb demand and reduce  inflationary expectations. "The Central Bank Council will be  consistent in its actions aimed at stabilizing inflation and  neutralizing any risk of "anchoring" inflation expectations. Under  the planned monetary policy scenario, annual inflation will decrease  and stabilize near the target 4% threshold at the end of 2023," added  the Chairman of the Central Bank.  The Council of the Central Bank  assesses the risks of inflation deviating from the envisaged  trajectory, mainly as balanced (the target threshold is set at 4%,  +/- 1.5 - Ed. note). If they move in any direction, the Central Bank  Council will react accordingly in order to ensure price stability.   The Central Bank of Armenia announces that it will present a more  detailed justification for the current increase in the refinancing  rate in the Central Bank's Monetary Policy Program (MPP) for the  third quarter of 2022, which is being prepared for publication at the  end of September.