50.5 billion drams to be allocated for the construction of the "North-South" corridor in 2023 - Deputy Minister 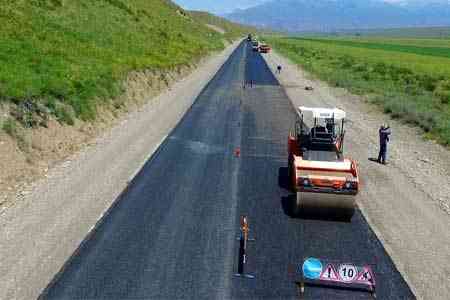 ArmInfo. 50.5 billion drams  will be allocated from the state budget of Armenia to continue the  construction of the North-South international road corridor in 2023.   Deputy Minister of Territorial and Infrastructures of the Republic of  Armenia Vache Terteryan Administration stated this during the  hearings in the commissions of the National Assembly of the Republic  of Armenia on the draft state budget of the country for 2023.

He noted that special attention will be paid to the northern  direction of the road - from Yerevan to Gyumri.  Currently, the  construction of sections of the Talin-Lanjik and Talin-Gyumri roads  with a length of 18.7 and 27.5 km, respectively, continues. As for  the Ashtarak-Talin road section, the work on it is half completed,  traffic has already been opened unilaterally, and if the current pace  of construction is maintained, it is possible that next year the road  will be completely ready for operation.

As for the southern section of the corridor, as the deputy minister  noted, preparatory work is underway to alienate land for the  construction of a 6-kilometer section from Sisian to Kajaran.

Preparations are also underway for the construction of approaches to  the Kajaran tunnel with a length of 4 km. A tender to identify the  contractor for the project has already been announced. The Eurasian  Development Bank will provide 19.5 and 11 billion drams in two  tranches for the implementation of the program.

In general, as Terteryan emphasized, 334.6 billion drams will be  allocated to the ministry from the state budget of the republic in  the next financial year for the implementation of 23 programs and 137  measures.

It should be noted that the construction project of the 40-km  Kajaran-Agarak section (Tranche-4) is financed by the Eurasian Fund  for Stabilization and Development, which is managed by the Eurasian  Development Bank, as well as the state budget of the Republic of  Armenia. The reconstructed section of the road with a length of 40 km  will be of the second technical category with an estimated speed of  80 km/h. The road section will include 18 bridges, 3 tunnels, the  length of the longest of which will be 7.5 km.  Heavy vehicles will  have their own lane, which will facilitate the transportation of  goods.

The North-South project will reduce the distance from the Iranian  border to the Georgian border from 556 to 490 kilometers. The road  will significantly facilitate access to the Black Sea not only for  Armenia, but also for Iran. The project will provide access to the  Black Sea and European countries through the territory of Armenia  (Meghri-Kapan-Goris-Yerevan-Ashtarak-Gyumri-Bavra) and Georgia. The  corridor was originally scheduled to be completed in 2019. The cost  of the project was constantly being revised, becoming more expensive.  Meanwhile, in September 2012, when the construction of the highway  began, the amount mentioned by representatives of the Armenian  government was several times less - $962 million, today we are  talking about investments of about 3 billion dollars.