AMD 4․653․223 to "Aren Mehrabyan" foundation: beneficiary of "The Power of One Dram" for December is the Health Fund for Children of Armenia 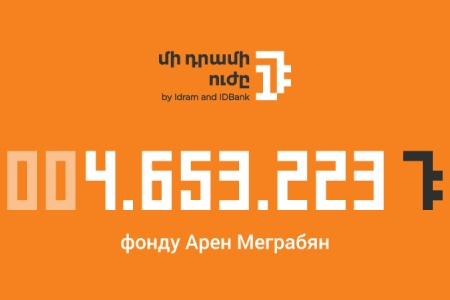 ArmInfo.At the end of November, IDBank and Idram summed up the results of the next program of “The Power of one dram” initiative. The entire amount collected during this month will be transferred to the Aren Mehrabyan Charitable Foundation.

The purpose of the foundation is to provide appropriate education to war veterans without a relevant profession who became disabled as a result of the war and, in connection with this, remained unemployed, as well as to all young people who aspire to receive an appropriate engineering education in the aerospace field.

The companies also announced the December beneficiary. The entire amount collected in December will be transferred to the Children's Health Fund of Armenia.

The Foundation helps organize the necessary treatment for children with serious health problems in the best clinics in Armenia and abroad. The Foundation also supports the re-equipment and modernization of regional medical facilities, as well as the international training of doctors. With more than a decade of experience in the field of charity, Armen Martirosyan personally helped hundreds of children struggling for life through public fundraising, organizing their treatment in the best clinics abroad before creating the foundation. And for a year and a half of its activity, the fund was able to help more than 2,000 children.

“We were delighted when we found out that our beloved IDBank and Idram will donate the entire amount of the December program of “The Power of One Dram” to the beneficiaries of our fund, which they really need. Last year, we were also honored to be the beneficiaries of this very important initiative, as a result of which we were able to help 7 children with serious immune system problems in the amount of AMD 8.057.944, buying them expensive life-saving medicine and giving them a chance to live. We will use the amount gathered in December to pay for the medical expenses of children who are fighting for their lives. On the eve of the New Year, this is a great gift for our children, because their dream is usually about one thing: to get well soon and enjoy a carefree childhood. “The Power of One Dram” initiative has repeatedly proven that even one dram can work wonders. We ask everyone to actively use the Idram&IDBank application during December, thereby helping children who are fighting for life, to live.”

According to Tatevik Vardevanyan, Head of Communications unit at IDBank, this is already the second cooperation between the Bank and Idram with the Health Foundation for Children of Armenia. “On the eve of the New Year, we decided to once again stand next to children with life-threatening diseases: everyone is waiting for a miracle, let this miracle happen, the children will recover, and we and our clients will try to help them with all our strength, thoughts and deeds. Let me remind you that by making daily payments using the Idram&IDBank application, Idram and IDBank terminals, IDBanking.am online platform, Idram.am website, our users become goodwill ambassadors and help companies donate one dram to the initiative,” says Tatevik Vardevanyan.