EDB Head: This year we have actively developed our portfolio in  Armenia 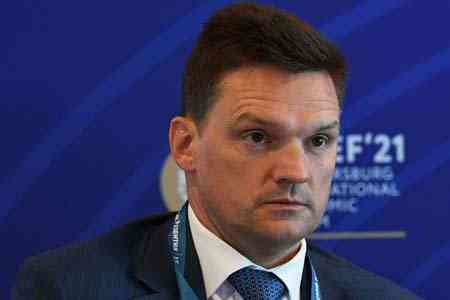 ArmInfo.Shareholders of the Eurasian Development Bank (EDB) are discussing a proportional increase in the shares of Kazakhstan and member countries in the  Bank's capital.  Nikolai Podguzov, Chairman of the Eurasian  Development Bank's (EDB) Management Board, announced this on December  9 in Almaty on the sidelines of the 8th Creative Media Contest  "Eurasian Integration and Development", summing up the results of the  year.

So, to clarify whether, in order to avoid sanctions, the Russian  Federation plans to reduce its stake in the Bank, and Kazakhstan will  take advantage of this to increase its stake, Podguzov stated that  that's not completely true. "I would not say in this case that there  will be an increase in the share of Kazakhstan. This is a  proportional increase in the shares in the bank of all member  countries. There is a negotiation process between shareholders.  Judging by the statements made by officials of Kazakhstan, the  process is progressing quite well. We expect that it will be  completed in the coming weeks or months, and we will see a new  configuration of EDB shareholders. I, as one of the direct  participants in this process, can say that such negotiations are now  actively ongoing," Podguzov said.

It should be noted that Russian shareholders, founding members of the  bank, own 65.97% of the shares, and Kazakhstan - 32.99%. And the  participating countries - Belarus, Tajikistan, Armenia and  Kyrgyzstan, own the rest of the shares.

In general, summing up the results of the year, he said that the Bank  had implemented more than 30 projects, and in general the portfolio  had grown and exceeded $5 billion. <And what is characteristic, the  projects were implemented in all countries of the shareholders of our  Bank. At the same time, we are developing well. We plan to start the  next year with confidence, because the number of bank projects has  been formed with a margin. And now we have projects for consideration  for a total cost of more than $4 billion, and we expect that in 2023  the laid down indicators of the strategy will be met>, Podguzov said,  recalling that 2022 began with quite turbulent developments, and the  ongoing geopolitical processes have had their impact on the activity  of financial markets and investments.

The head of the EDB stressed that the pace of project implementation  is quite high despite the difficult beginning of the year. In this  vein, he drew attention to the fact that according to the Bank's  strategy, the total volume of own investments will amount to 10.9  billion dollars in the next 5 years, from 2022 to 2026.  "But already  following the results of the first year of implementation of the  strategy, we managed to reach a higher indicator, setting an  ambitious trajectory that we hope to sustain. We have good prospects,  and we think that the project plan in this case allows us to look to  the future with optimism>, Podguzov added, noting that in the current  realities, the Bank carries out uniform activities throughout the  territory of the Eurasian Economic Union.

According to him, important projects were launched in each of the  participating countries in 2022, and for the first time country  strategies were developed, which were already officially adopted in  Armenia, Tajikistan, Belarus, and Kyrgyzstan.

"For example, this year we have actively developed our portfolio in  Armenia. We have formed a very serious backlog in Kyrgyzstan and I  think 2023 will be a breakthrough year in terms of package activities  in this country," he said, adding that the traditional activity in  Russia, Belarus and Kazakhstan is also maintained.

In conclusion, he stated that 2022 was a rhythmic year, the Bank was  able to overcome all the difficulties and turbulence in the financial  markets. "We are quite confident about the next year, and we believe  that the role of the EDB as the main development institution in the  Eurasian space will be continued and strengthened," he summed up.

The EDB is an international financial organization designed to  promote economic growth and expand trade and economic ties between  member countries of the Eurasian Economic Union. The shareholders of  EDB are 6 countries: Armenia, Belarus, Russia, Kazakhstan, Kyrgyzstan  and Tajikistan.