186 transactions worth AMD 2.454 bln concluded as a result of placement of common nominal stocks of Unibank 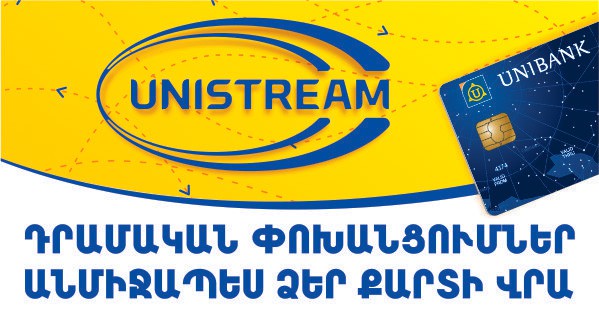 It is worth mentioning, that "UNIBANK" OJSC is the first company in Armenia, which has gone public through an IPO on stock exchange.

The analysts of AmRating agency think that Unibank will probably have to appear with additional issues in 2016, because its total capital as of 1 Oct 2015 was 20.8 bln AMD. Following the IPO, the Bank actually needs another 6.7 bln AMD to meet the Central Bank's new standard (30 bln AMD) that will come into effect on 1 Jan 2017. The analysts think that the Bank may increase its capital due to the small profit and additional investments of the major shareholders.

To note, the stakeholders of the offshore company Gloveri Holdings LTD, which is the sole owner of Unibank, are Russian bankers Gagik Zakaryan and Georgy Piskov - the former owners of the Moscow-based Uniastrumbank and the current majority shareholders of the UNIStream money transfer system. Kommersant reports that Aurora Russia (UK) has launched negotiations with several individuals on sale of a 26% stake in UNIStream. The price of the deal will be much lower than Aurora acquitted that package in 2006. Sources say that over the past half a year Aurora Russia held active talks with interesants and the talks were complicated by the status of the fund as a minority shareholder and the lack of risk appetite for Russia. Analysts think that the reason of the deal may be the peculiarity of the stockholder agreement, because the document points out a certain price and neither of the parties can purchase the stake of the other owner for a lower price than fixed in the agreement.