Samvel Chzmachyan: Government and Central Bank of Armenia have chosen the lesser of two evils 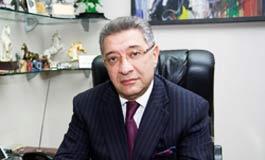 ArmInfo. The financial authorities of Armenia and the Central Bank of Armenia have chosen the lesser of two evils, President of the Union of Banks of Armenia Samvel Chzmachyan said at today's meeting of the International Banking Council, when speaking of the Armenian Central Bank's policy about retention of stability of the national currency exchange rate.

"Within the Eurasian Economic Union, everyone has come across such a deliberate artificial depreciation of the AMD exchange rate against USD and EUR, which was aimed at stimulating national exports. We refused to create favorable financial conditions for quite a small number of exporters, whose proceeds do not exceed $1.5 bln, given that the Armenian Government supports serious exporters by other stimulating tools," Chzmachyan said, noting that otherwise the Armenian economy would face high macroeconomic risks.

In this light, Chzmachyan said that in case of Armenian dram depreciation, the negative macroeconomic consequences will be visible in the long-term outlook as well. Among the key risks, he mentioned the growth of inflationary expectations, a new wave of distrust in the national currency, which will result in growth of dollarization in the Armenian economy. "As a result, this will affect the banks having USD assets, and the borrowers will face difficulties with loan repayment," he said, noting that the loan default in the Armenian banking system is already about 10% versus 6-7% a year before.

He added that the Union of Banks of Armenia supports the Central Bank's policy in regulating the currency risks.

To note, representatives of the International Coordinating Council of Banking Association of CIS, Central and Eastern Europe took part in the meeting.