EBRD to subscribe for 33,500,000 ordinary shares of Lydian International Limited at a price of C$11.39 Million 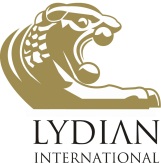 ArmInfo. Lydian International Limited (TSX:LYD) ("Lydian" or "the Company") has announced that the Board of Directors of the Company approved the terms of a proposed non-brokered private placement (the "Private Placement") of ordinary
shares of the Company to the European Bank for Reconstruction and Development (the "EBRD") on July 21. Under the terms of the proposed Private Placement, the EBRD will subscribe for an aggregate of 33,500,000 ordinary shares of the Company at a price of C$0.34 per share, for aggregate gross proceeds of C$11,390,000. The funds will be used to finance the Environmental and Social Mitigation Measures (ESMM) undertaken as part of the Amulsar Gold Project in Armenia.

"We are pleased to have the ERBD's continuing support as we begin development of the Amulsar Gold Project. This investment provides further recognition of Lydian's commitment to good international industry practices and standards as we make the transition from developer to producer," said Howard Stevenson, President and CEO of Lydian International.

Completion of the proposed Private Placement is subject to, among other things, negotiation and execution of definitive agreements, approval of the Toronto Stock Exchange and any other required regulatory approvals, as well as other customary terms and conditions. There can be no assurances that the Private Placement will be completed on the terms approved by the Board of Directors of the Company, or at all. The Company proposes to use the net proceeds of the Private Placement for the financing of environmental and social mitigation measures and related activities in connection with development of the Company's 100%-owned Amulsar Gold Project.

Earlier, at the request of ArmInfo, Geoteam Managing Director Hayk Aloyan commented on the prospects and opportunities for the Amulsar Project with the additional equity participation perspectives of EBRD earmarked to support ESMM. "Geoteam and Lydian are committed to best international practice in Environmental and Social Management of our Amulsar project. The recent disclosure of the amended Environmental and Social Impact Assessment and a through consultation process with a multitude of stakeholders is yet another step towards ensuring that
Amulsar becomes a world-class well managed mining operation. It is both our institutional shareholders', including IFC and EBRD, and our company management commitment to see this mine advance in line with industry best practice. Today mining industry worldwide has come up with modern and applicable technological measures to ensure safe and sound operations and my firm belief is that Armenia too can have a modern and safe mining industry. Amulsar will be an important step towards that goal. It is also important to mention that while the industry worldwide is experiencing economic down-cycle, Lydian has secured most of the investment needed to build the project that will benefit the shareholders and bring economic opportunities to Armenia," Hayk Aloyan said.

The EBRD has been an important strategic investor for Lydian since 2009. Including its initial investment, the EBRD has supported Lydian through four previous private placements. Representatives of the EBRD work continually with Lydian to develop and implement good international industry practices, including compliance with the
framework embodied in the EBRD Performance Requirements. The EBRD's Armenian and regional presence is also an important resource that consistently provides support for Lydian's exploration and development programs.  UK domiciled Lydian International Limited is the sole owner of Geoteam CJSC that was granted the Mining Right for its 100% owned Amulsar Gold Project. On May 17, the company published
its updated ESIA for the Amulsar Gold Project. Geoteam CJSC was granted a Prospecting License in 2006. Since 2006, the investments in exploration and other activities in Amulsar have amounted to nearly US$80 million. Among key shareholders of Lydian are international institutional investors including IFC and EBRD.  The company plans about $370 million capital investments in the Amulsar Project.
According to the feasibility study, the proven reserves are 2.5 million ounces, the total recoverable gold is 2.1 million ounces over a 10.4 year mine life, gold production is averaging over 200,000 ounces per year  (10 million tons of ore), low all-in sustaining costs of $585 per ounce of gold, 87% gold recoveries.  Amulsar is the
second largest deposit in Armenia in terms of the reserves. The peak workforce during the Project's construction phase (construction activities will last for about 2 years) could be as high as 1,300, while the total workforce during operations within the next more than 10 years is estimated at 650-700 employees.