Tigran Jrbashyan: "I am not trying to seek a black cat in a dark place, if it`s not there" 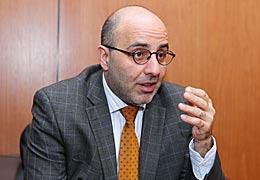 ArmInfo. "There are some  disparencies in the new Program of Armenian Government, which  actually do not conform to the objectives targeted by the Government  within that Program," Tigran Jrbashyan, famous expert in economy and  the Board Chairman of the American Chamber of Commerce in Armenia  (AmCham), told a news conference on October 24 mentioning that the  new Program looks mostly like a chronicle document, reflecting the  current realities.

"I am not trying to seek a black cat in a dark place, if it is not  there"-expert said, clarifying that the new Program appears more like  some certain tactical guide on  actions (particularly -  like  a  number of arrangements to be held in nearest future), than a tool  document to implement basic and strategic changes.  We go on  'patching the holes'. This Program does not assume any implementation  of new methods and new paths. That's why it should get an appropriate  estimation,"- Jrbashyan accentuated.

The expert also stated that the new Tax Code is a legacy of the  former Government team, but he doesn't share the view that today's  authorities do not bear a liability for and adoption of a regulatory  document, as far as it was possible to cancel that process. I  strongly hoped that the adoption of the new Tax Code would be  postponed with a purpose of clarifications and implementation of new  approaches. But it happened just as it did,"- he noticed.

Within this, the expert stated that in case the Tax Code is approved,  all the risks will remain the same. Particularly, he noted the  constriction of the consumer market, external and domestic  investments, continuous leakage of qualified professionals etc.  According to Djrbashyan, the main problem is the incomplete concept  of the document. "We keep using the same approaches implemented  during recent decades. Of course, we should expect for some changes  in upcoming few months, but it will be extremely hard to make any  basic changes using this document," the expert stated.

According to Jrbashyan, from all the proposals regarding  modifications to tax regulations just and only those integrated to  the actual management concept were taken into consideration. In this  context he added ":the proposals assuming essential changes in the  taxation regulatory framework, have been rejected exactly for that  reason, particularly, in respect to real estate taxes, as well as  regarding health, education and agriculture."

We remind that Armenian National Assembly passed the second reading  of the draft new Tax Code with 79 votes "for," 24 votes "against,"  and 1 "abstention" on September 29. The latest version of the Tax  Code went criticized by business and expert communities of the  country, because the document is conceptually aimed not to the  development of the country, but to meet it's fiscal needs. This  "rash" adoption of the document is caused not only by the fact that  the prior Government didn't understand completely the targets of the  country, but also by the reason that IMF forced the Government in  relation to lend a subsequent financial aid package with a value of $  130 mln. The new Government announced that it is intended to revise  the new Tax Code without delaying the IMF shaped deadlines.