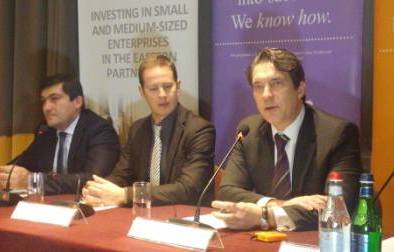 ArmInfo. SME sector in Armenia  has great development potential, despite the small scale of local  market this sector is quite viable, Head of EBRD Yerevan Resident  Office Mark Davis stated on October 26 at the opening of two-days  trainings on "SME Finances". The trainings are aimed at raising  professional skills of local consulting companies for providing more  qualitative services to small and medium enterprises.

According to the Head of EBRD Yerevan Resident office in order to  ensure due environment for SME it is necessary to first and foremost  raise the level of knowledge of consulting companies, which will be  able to contribute to further development of the field, develop  derivative securities market and, most importantly, to set the main  directions of the field development. Attracting financial funds into  the sector is also very important according to Mark Davis. In this  light he expressed opinion that certain group of SMEs have access to  financial funds via receiving assistance from various local and  international lending institutions, while for the others these  sources are restricted. IPO or issue of bonds might become a possible  instrument for attracting funds in his opinion. However, it is too  early to discuss this issue on the current stage.

According to Tigran Aghabekyan, EBRD Small Business Support National  Programme Manager, starting from 2011 consulting assistance was  provided to small and medium enterprises within 1200 projects, for  the implementation of which 9 mln EUR was allocated. As a result of  this assistance they received around 133 mln EUR. Aghabekyan noted  that more than 90% of the projects were successful, while 70% of  enterprises registered 8% growth of turnover in average. 65% of  enterprises opened new job places.

To recall, on October 24 Armenia and the EU announced the launch of  the EU4Business Week in Armenia. Running from 24 to 28 October 2016,  the EU4Business Week will highlight the EU support to small and  medium-sized enterprises (SMEs) through series of events and include  other activities facilitating private-public dialogue for the benefit  of businesses both in the Eastern partner countries and in Armenia.