Karen Karapetyan at Eurasian Intergovernmental Council Session: Armenian side is ready to the closest cooperation 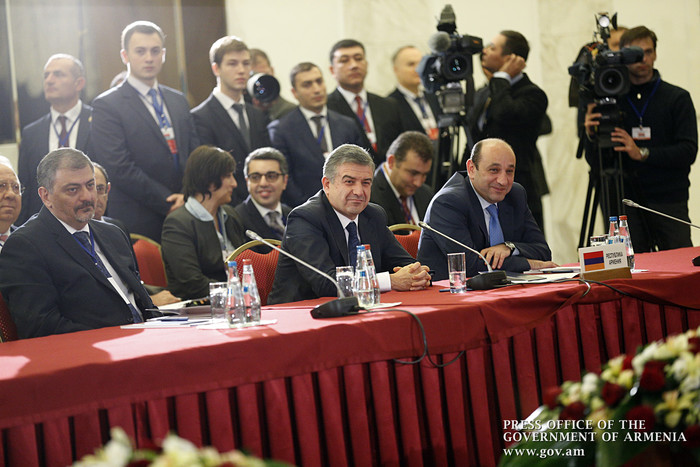 ArmInfo. The Prime Minister of  Armenia Karen Karapetyan attended today a regular meeting of the  Eurasian Intergovernmental Council in Minsk. The close meeting of  EAEU heads of government was followed by a joint photo session, and  after the heads of government immediately proceeded to the Council's  enlarged meeting.  Prime Minister Karen Karapetyan delivered a speech  at the Eurasian Intergovernmental Council's enlarged meeting.

As the executive body press office informed, in his speech the  Prime-Minister said: "We have already considered a number of key  issues of the integration agenda in a narrow format. Concerning the  items on the plenary session agenda, I wish to state that Armenia is  for the adoption of the draft documents agreed for this meeting.  However, I would like to dwell on some of them.

Karen Karapetyan noted that all the parties equally share the  approach that the international activity, which goes in line with the  formation of foreign policy of the EEU, the deepening of the Union's  economic relations with third countries and key integration  associations, is above all intended to promote the modernization of  the national economies of the Member States and enhance their  competitiveness. Karen Karapetyan also mentioned the importance of  the consequent cooperation with the specialized divisions of UN, and  shaping the interaction with EU, Shanghai Cooperation Organization  and other organizations.

"We believe that the ongoing talks with China, Israel and Serbia, in  particular, need to be broadened through the launch of substantive  consideration of the expediency of negotiations with other countries.   Taking into account the work on the conclusion of the possible free  trade zone agreement with the Republic of India, it seems reasonable  that the Supreme Eurasian Economic Council should also consider the  question of starting talks over the EEU-India track in December, 2016  without linking it to the issue of cooperation in the multilateral  EEU-SCO format,"- Karapetyan stated, noting the importance of signing  the appropriate agreement with Iran. Karapetyan accentuated the  opportunities of the work on a construction, providing the  implementation of the temporary agreement, held simultaneously to the  negotiations on Preferential Trade Agreement between EAEU and Iran.

"We believe that the expansion of international and multi-format  cooperation must be based on real premises and structured so as to  take into account the actual willingness of third countries to  establish cooperation with both individual EEU-member States and the  Eurasian Economic Union, as a whole,"- the Prime Minister stated.

Considering the differences in the regulatory frameworks of member  States, we fully share the approach that focuses on ensuring the  legitimacy of the turnover of goods across the EEU customs territory  through the introduction of a traceability mechanism, Karapetyan paid  an importance to work proceeding from the belief that it should not  lead to additional tax and customs encumbrances, higher prices for  goods and services and, at the same time, would not adversely affect  the  EAEU member States' investment attractiveness and macroeconomic  indicators.

"This mechanism needs to be introduced in such a way that its  activation would not lead in any way to the opposition of one of the  pillars of our Union - the free movement of goods. Therefore, we are  ready to actively cooperate with the countries in a bid to work out  the problems existing in this respect,"- Karapetyan said.

The enlarged meeting of the Eurasian Intergovernmental Council  discussed and approved a number of documents. In particular, the  Council approved the unified budget for 2017 and the 2015 budget  performance of EEU bodies.

The meeting highlighted the need for closer cooperation with third  countries, as well as deepening of economic and trade relations  between the Member States. In particular, the speakers emphasized  that a number of countries have shown interest in cooperation with  the Eurasian Economic Union in various formats, and appropriate steps  are being taken to that effect. The meeting participants  congratulated the prime ministers of Armenia and Kazakhstan for  assuming the office of head of government and attending the  proceedings of the Council for the first time.