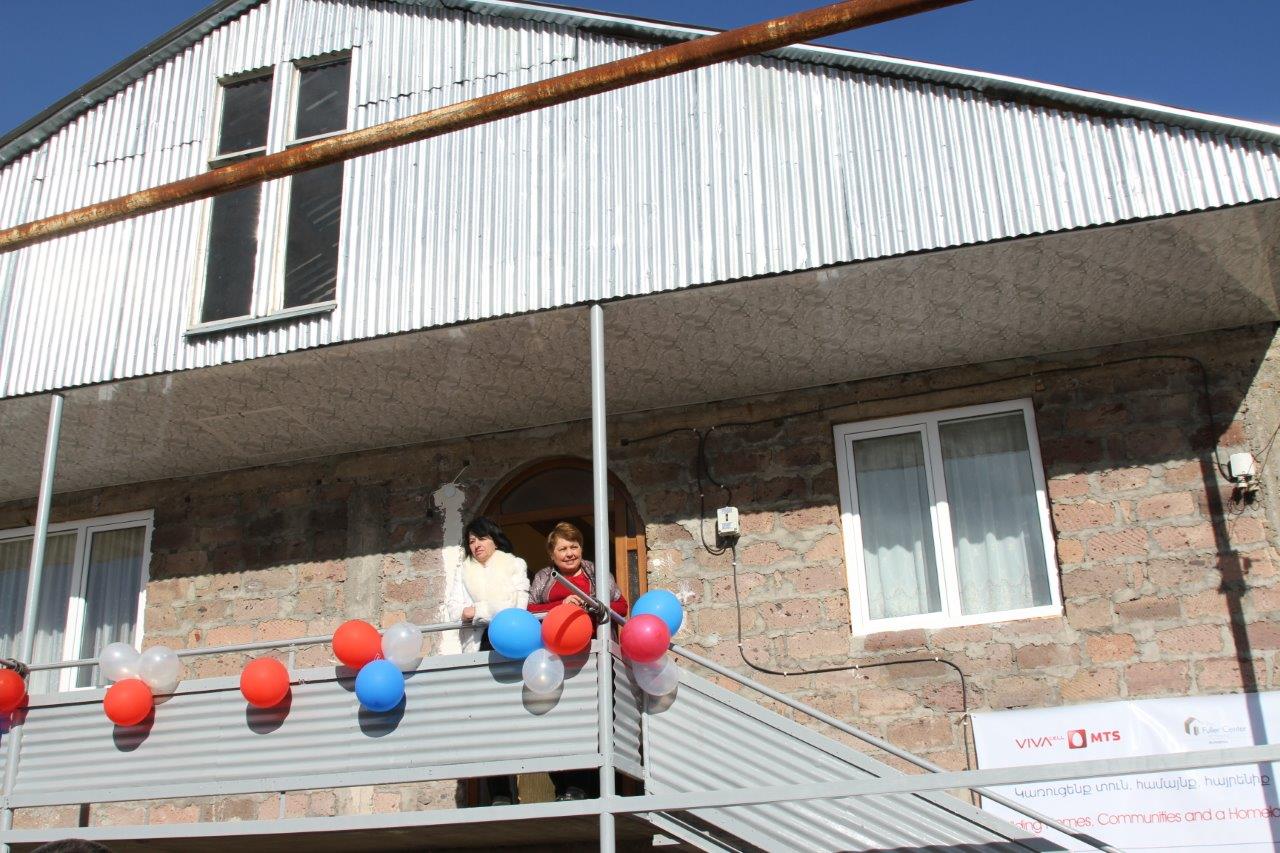 ArmInfo. In the frames of the  housing project, VivaCell-MTS General Manager Ralph Yirikian and  "Fuller Center for Housing" Armenia President Ashot Yeghiazaryan paid  just another regional visit. This time the partners visited the  Sukiasyan family in Stepanavan town of Lori region, the press-service  of VivaCell-MTS informs.

The Sukiasyans are one of the three families that have received  support through the housing project in Lori region in 2016. They had  been homeless after the 1988 earthquake and had lived in a metal  container for 28 years. In 2000, the family bought a half-built  house, but was not able to complete the construction and move into a  stone house.

In the frames of the housing project, the Sukiasyan family started  the construction of their half-built house, and now, together with  the partnering organizations, they celebrate the long-awaited  housewarming.

''Sixteen long years have passed... and during all these years we  were not able to complete the construction of our house. Every time  we tried, we came upon an obstacle. My father was even thinking about  leaving the country and working abroad to earn the money for the  construction, but something kept him and us from doing that. We  always thought it is better to live in a metal container, than be  separated from each other. May be it was the strong bonds with the  Homeland that kept us from leaving. I do not know. What matters is  that our father is with us, and that we have built a house of our  own. I am sincerely grateful for that!'' said sixteen-year-old  Lilith.

Owing to the financial investment of VivaCell-MTS, in frames of  "Fuller Center for Housing" Armenia project, the housing problem of  20 families has been solved in Lori region only.

"Five years ago, when we presented apartments to 20 families in  Vanadzor who suffered from earthquake, we were hopeful that the look  in the eyes of the children growing up in metal containers would  change from sad and desperate to bright and optimistic. A child, who  no longer has faith in the future, cannot bring positive changes to  the country. Fully acknowledging the seriousness of the situation, we  have tried to implement one more program with the aim of supporting  socially vulnerable families. Thus, owing to the partnership with  "Fuller Center for Housing" Armenia, we have succeeded in providing  decent housing conditions to twenty more families in this region. My  hope is that the hard conditions of life in metal containers will  stay in the past and will no longer cast a shadow on the happiness of  these families that strive to work and thrive in their Homeland,"  said VivaCell-MTS General Manager Ralph Yirikian.

"The story of this family is similar to that of hundreds of other  families in Lori region:  people, who grew up in metal containers,  get married and move into another metal container. Unfortunately, the  end of this cycle is still not noticeable. Nevertheless, the  housewarming of each house is a step towards a victorious end,'' said  "Fuller Center for Housing" Armenia President Ashot Yeghiazaryan.

For the implementation of the housing project in the current year,  VivaCell-MTS has invested about AMD 105 mln. 21 families have  finished the construction of their half- built houses; another 21  have renovated the houses. In the frames of the five-year  partnership, 135 families have been supported through the housing  project in ten regions of Armenia.

VivaCell-MTS (K-Telecom CJSC) is Armenia's leading telecommunications  operator, having the widest 2G/3.75G/4G network reach and spreading a  wide range of Voice and Data services all across Armenia. Having the  best of the Armenian people interest at heart since its launch on 1st  July 2005 and in a short period of time VivaCell-MTS has managed to  build a nationwide network and a considerable customer base.  VivaCell-MTS drives innovation and aims at always being at the  forefront of any development serving the Armenian mobile  communications market.

Fuller Center for Housing Armenia is a non-governmental, charitable  organization that supports community development in the Republics of  Armenia and Artsakh by assisting in building and renovating simple,  decent and affordable homes, as well as advocating the right to a  decent shelter as a matter of conscience and action. FCHA provides  long-term, interest-free loans to low-income families. The monthly  repayments flow into a Revolving Fund, which is used to help more  families, thereby providing a financial foundation for sustainable  community development. Since 2008 the Fuller Center for Housing  Armenia has assisted more than 560 families.