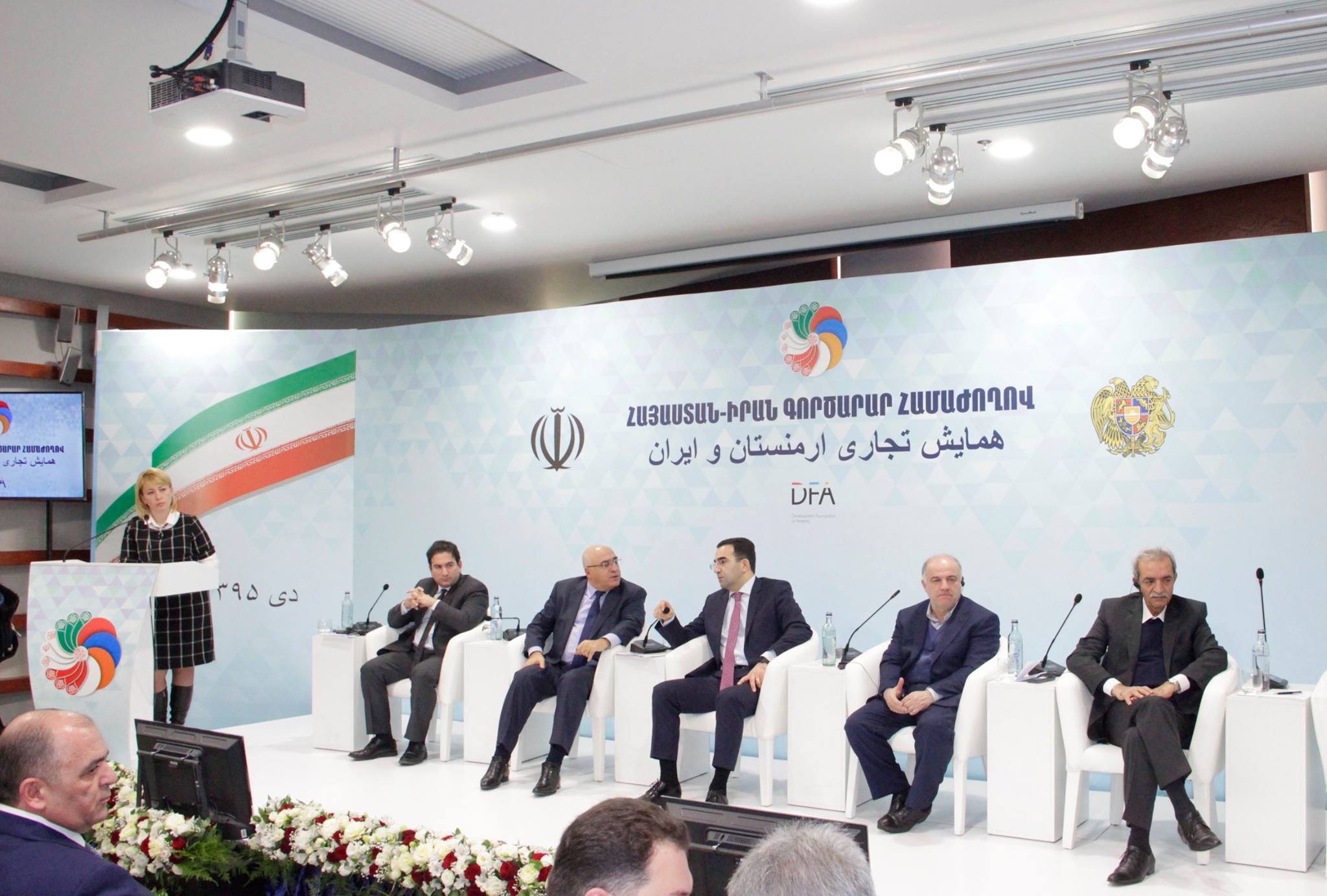 ArmInfo. Trade turnover between Armenia and Iran will be positive next year and in two year outlook the amount of turnover will be increased two-fold, Deputy Minister of Economic Development and Investments Hovhannes Azizyan stated answering to ArmInfo's question on the sidelines of Armenian-Iranian business forum attached to the visit of Iran's President Hassan Rouhani to Armenia.

"Armenian-Iranian business forum is the regular important step, which will provide opportunity to our countries to increase trade turnover and mutual investments. We intend today to present to the Iranian side the concept of establishing free economic zone in Meghri, projects on founding joint enterprises, which will help to increase the amount of products exported to Iran and will give Iran an opportunity to launch export to those markets, in which Armenia has beneficial trade regimes, particularly to the EEU countries", he informed.

According to the Deputy Minister the Iranian side is interested in founding joint enterprises in the field of pharmaceutics, processing of agricultural products, chemical industry (production of abstergents). Azizyan also informed that within two months it is planned to develop a program for implementation of the set tasks. At the same time answering to ArmInfo's question Azizyan noted that there is big demand in Iran on mutton, chocolate, non-alcohol drinks, water, cigarretes, pharmaceuticals. Among products imported from Iran are products of petroleum refining industry, plastic ets.

Advisor to Iran's Minister of Energy Homayoun Haeri also made a statement at the forum. He emphasized the importance of developing trade-economic cooperation with Armenia in all areas.  According to him the states face two top-priority tasks:  increase of trade turnover and solution of transport problems, particularly creation of North-South transport corridor, which will open way to the Black Sea for Iran. At the same time Haeri expressed readiness on behalf of the Ministry to provide assistance in all the issues aimed at efficient development of bilateral relations.  Gholamhossein Shafei, President of Iran's Chamber of Commerce, Industries and Mines for his part gave negative assessment to the level development of economic cooperation between the two countries, which according to him yields to the level of political cooperation several-fold. The reason of such a situation, according to him, are restrictions caused by sanctions against Iran. ''At the current stage it is necessary not only to fill the gap emerged because of sanctions but also to establish a new ground for development of further relations'', he said. According to him Armenia can become an intermediary for export of Iranian products to the markets of EEU, EU, China and India.

To note, more than 170 businessmen, 90 of which from Iran, participated in the work of the forum. Within the forum meetings in B2B format will be held, during which the sides will be able to strengthen and deepen ties and agree on joint programs.

According to the National Statistical Service of Armenia trade turnover between Armenia and Iran in Jan-Oct 2016 totaled $199mln with 14% y-o-y decline. Particularly,  exports dropped by 3.8% to $65mln and imports by 18.2% to $134mln. Iranian investments into Armenia's economy have also significantly declined. According to official statistics, the total net flow of investments in Jan-Sep 2016 totaled 220 mln AMD ($460 thsd) versus 315 mln AMD for the same period of 2015.Net flow of direct investments for 9 months 2016 totaled 27.0 mln ($57 thsd) versus negative 98.3 mln drams a year before. The amount of accumulated Iranian direct investments totaled 2.2 bln drams ($460 mln) by the end of September.