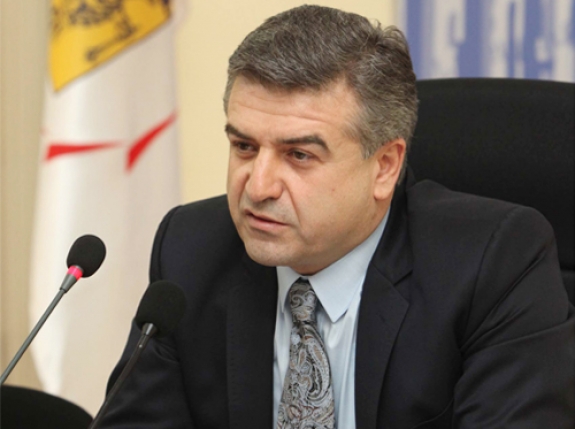 ArmInfo. Armenian Prime Minister  Karen Karapetyan thinks nothing endangers the energy safety of the  country. "There is no Damocles' sword over our head and we have an  alternative gas pipeline," Karapetyan said at a press conference on  Jan 13, when asked by ArmInfo about threats in case of Georgian  Government's possible sale of 25% of shares of the main gas line  Azerbaijan's SOCAR.

The Prime Minister said that Armenia's energy safety ratio is much  higher than in most European countries. "In this context, there are  no threats at the moment. But this does not mean that we should not  work towards enhancement of the energy safety," he noted.

He pointed out that there are no negative consequences for Armenia  regarding the possible sale of 25% of shares of JSC Georgian Oil and  Gas Corporation (which also owns the main gas line running to  Armenia) to SOCAR. "Let them buy 25% of the pipeline shares. This  will not create any threats for us, because the Azeri side will not  own the control block of shares," Karapetyan said. He also ruled out  the scenario, under which Azerbaijan - having become the company's  shareholder - can suspend the gas transit to Armenia.  This would run  counter to international law, he said.

To note, earlier the Georgian media reported, citing Georgian Prime  Minister Irakli Kvirikashvili that in case of a favorable situation,  the Georgian government will put on sale 25% of shares of JSC  Georgian Oil and Gas Corporation and the Georgian Railway.   Azerbaijan's SOCAR has already expressed an intention to buy the gas  pipeline.  Russian gas is supplied to Armenia via that pipeline,  which is of strategic importance. So, the further possible scenarios  raise the Armenian side's concerns.