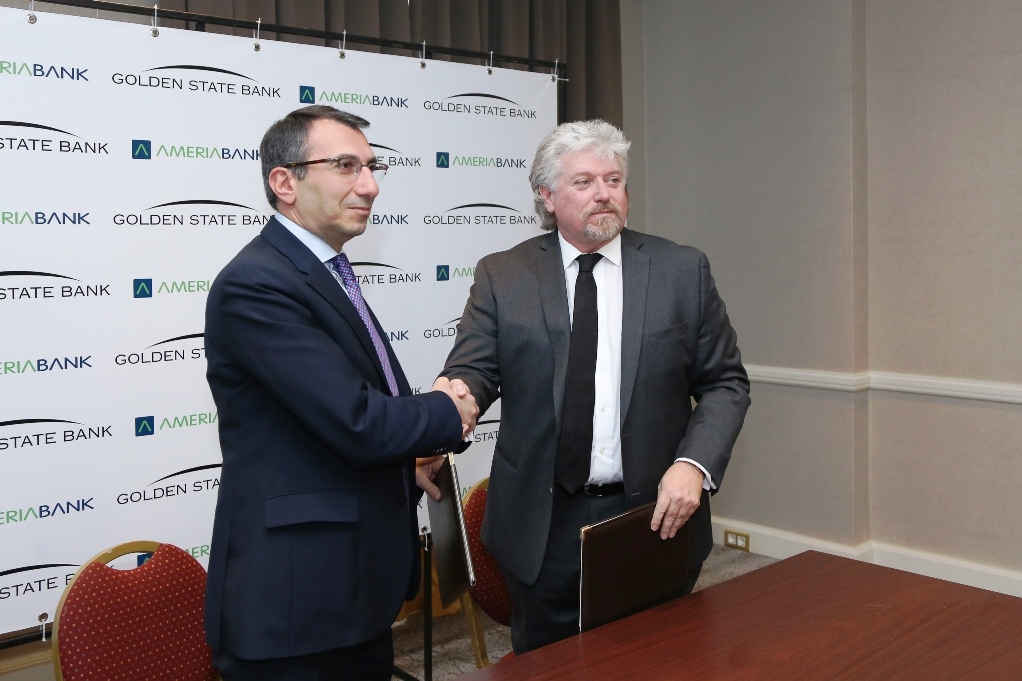 ArmInfo. CEO of Ameriabank Artak Hanesyan and Vice President of Golden State Bank Viken Alex Hovsepian signed a Memorandum of Understanding on January 18, which will provide new opportunities for Armenian and US enterprises and individuals for making bank operations and will allow using services of both markets.

"This is a new stage of cooperation of Armenian and US banking systems, which will facilitate access of Armenian citizens to banking market of California and will allow Diaspora representatives to use services of Ameriabank in the United States via our bank and make investments into Armenian economy, which in turn will have positive impact on economic development", Vice President of Golden State Bank Viken Alex Hovsepian noted considering the memorandum a strategic value for Armenia.

Ameriabank Development Director Tigran Jrbashyan for his part stated that from now on within bilateral agreement those Armenian companies and individuals, who want to purchase real estate in California or make business can have a reliable partner in the name of Golden State preliminary applying to Ameriabank.  At the same time enterprises and residents of the United States have an opportunity to use full package of services and products of Ameriabank through Golden State Californian bank.

"This is the first experience of cooperation in such a format between US and Armenian banks, which provides Armenian citizens an unprecedented opportunity to purchase property and use services of the bank via financing from the Californian bank preliminary applying to Ameriabank", Jrbashyan noted. According to him within the Memorandum the clients of the bank will get access to numerous bank services including opening of accounts, deposits, bank and inter-bank operations, consulting services, etc. The terms of providing services are being negotiated at the moment and will be set considering demands of the clients, he added.

As for the Californian market Jrbashyan noted that according to the survey conducted by the bank the market is large and financial opportunities exceed capacities of French, Russian and other large Armenian communities 2-fold. "California is a large partner in terms of investments, transfers and charitable programs", he noted. In this light the sides expressed hope that due to cooperation the amount of US investments into Armenia's economy and the number of provided services will increase. "I hope that the cooperation will be held in win-win format", Jrbashyan said.

The sides avoided giving concrete forecasts. However, in this light CEO of Ameriabank Artak Hanesyan noted: "There are no estimations, but considering our compatriots in California and success they have reached there we think that there is a huge potential. The matter concerns billion of dollars. If we manage to earn trust we will be able to attract large investments in Armenia, even in the form of deposits, why not?"

According to ArmInfo's Financial Rating of Armenian Banks, as of October 1 2016, Ameriabank had a leadership position in the local banking market by assets - 524.1 bln drams (up 18.5% y-o-y), by credit exposures - 352.3 bln drams (up 21.4% y-o-y), business loans - 306.8 bln drams (up 22.4%). The bank is among leaders also in terms of financing the industrial sector (including in energy field), agriculture, construction, trade, public catering and services. Efficient placement of loans enabled the bank to ensure 3.5 bln drams of net profit for 9 months of 2016 (1st place in the market). The bank has leadership positions by liabilities: both the time deposits and call liabilities.  Ameriabank CJSC is a universal bank offering corporate, investment and retail banking services in a comprehensive package of banking solutions. Ameria Group CY Ltd.-79.3% and EBRD- 20.7% are the shareholders of the Bank.