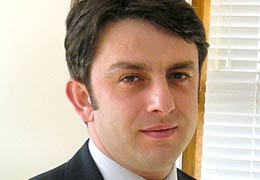 ArmInfo. The Minister of Economic Development and Investments of Armenia Suren Karayan and "Capital Locus" founder Avtandil Gogoli signed Memorandum of understanding on February 8th, aimed at amplification of the presence of international financial organizations and investment companies in Armenian business.

As the press-service of the Ministry told ArmInfo, Karayan noted that according to the Armenian Cabinet of Ministers' policy of investments stimulation, The Ministry will support the cooperation between "Capital Locus" and Armenian companies. In his turn, Avtandil Gogoli noted that 8 projects are included in the current work of the company for the local private companies at the total amount of $38mln. The given companies are engaged in agriculture, food processing, renewable energy and real estate investments.  According to him, it is expected the main part of the projects to finish during the I and the II quarter of 2017.

"Capital Locus" is an independent financial consulting company, found in 2016 in Yerevan. The founder of the company is the Ex-Director Executive of "Pro Credit Bank" Avantadil Gogoli.