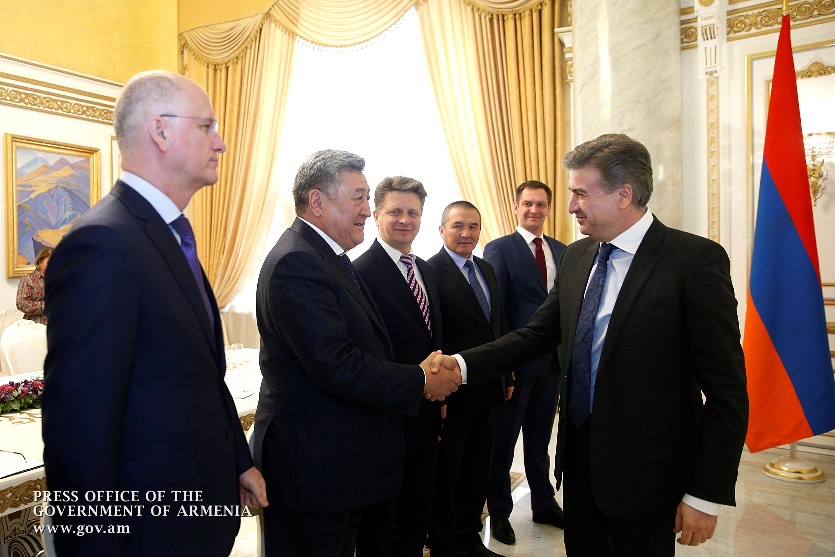 ArmInfo. The Prime Minister  of Armenia Karen Karapetyan received the Russian Transportation  Minister and the Chairman of the Russian part of the  Intergovernmental Commission on Economic Cooperation between Armenia  and Russia Maksim Sokolov, who visits Armenia in order to participate  the 6th meeting of heads of authorized bodies of the transport sector  of EEU states.

As the Government's press-service told ArmInfo, during the meeting,  the sides discussed the issues of further development of the  Armenian-Russian relations and the agreement execution process  reached in the framework of the Armenian Prime Minister's official  visit to Russian Federation. It was mentioned that steps are taken  already and there is a progress.

While appreciating the high level of the Armenian-Russian allied  relations, Karapetyan once again noted that there is a huge potential  for relations development. In that context he noted the importance of  Armenian-Russian Investment Fund creation, which will provide  possibility to attract Russian Capital to Armenian business by joint  projects supporting the cargo turnover volume increase. The  Government's head noted the necessity of agricultural cooperation  development as well and said that the there are steps taken in  direction of agricultural facilities supplement process.

Karapetyan and Sokolov spoke on transport cooperation sector, the  development and modification of the infrastructure, the programs of  free economic zone creation on the border with Iran and Russian  companies' participation in the process. The Russian Transportation  Minister  noted that the free economic zone in Meghri may become a  good field for Russian business on  trade and economic relations with  the Iranian market development. According to Sokolov, this program  may appear to be useful for all sides. The sides express readiness to  continue the cooeperation and give a new impulse to bilateral trade  and economic relations.