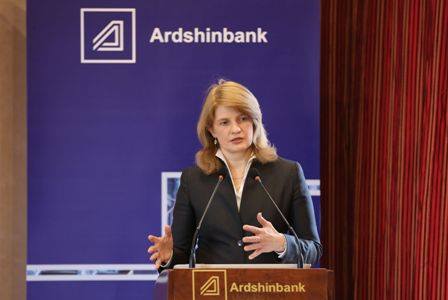 ArmInfo. A meeting of Armenian  banks  leaders  with InfoWatch Group Director Natalia Kasperskaya was  held in the head office of Ardshinbank. Kasperskaya, which is one of  the co-founders of Kaspersky Lab, is opne of most reputable persons  in Russian IT industry.  According  to the information shared with  ArmInfo at the press office of the Bank, during the meeting actual  issues were discussed, particularly the development of IT security  sector, improvement of automated banking security systems etc.

"" In banking business the information security is the critical  factor and the protection of corporate information is real expression  of  any company's responsibility in front of the clients and own  employees," Natalia Kasperskaya said. She told also about the changes  in IT security models,  mentioning that traditional " incident based"  approach in respect to companies security has expired own actuality.   In his turn, Ardshinbank Board Memeber Artyom Constandyan, who is  also the member of Armenian Jurisdiction Board under the President of  Armenia, mentioned that today the issue of security providing,  including that in respect to IT sector, goes much further of the  limits of specialized entities and divisions of banks and becomes one  of founding corporate functions, implemented by all the  organizational structure of the entity, and the information  protection becomes the key stone of securing the competitiveness.   Mher Grigoryan, the Ardshinbank  board Chairman, in his turn  expressed common opinion, that cybersecurity is an integral and  actual part in the context of modern world tendencies, mentioning the  confident interest of Armenian banks in the issue of informational  security.

To mention, I nfoWatch is a group consisting of several companies  that develop software products and integrated solutions to ensure  information security of organizations and combat external and  internal security threats. InfoWatch Group has 20 offices in Russia,  Germany, Belarus, and Malaysia. Main R&D office in Moscow employs  over 300 specialists and experts in the development, implementation,  and promotion of proprietary products and technologies.

"Ardshinbank" CJSC was founded in 2003. At present,  Ardshinbank,  taking into account Areximbank- Gazprombank group,  combined with it,  has 72 branches (56 of its own and 16 Areximbank)  and a  representative office in Paris. In terms of coverage of the  branch  network, Ardshinbank has become the leader since 2017, not  only in  terms of the total number of units, but also in the number of   regional branches. The majority shareholder of Ardshinbank is LLC   "Center for Business Investments" with 70,11% equity interest in the   capital and "Region Industrial and Financial Corporation" - 28.10%.