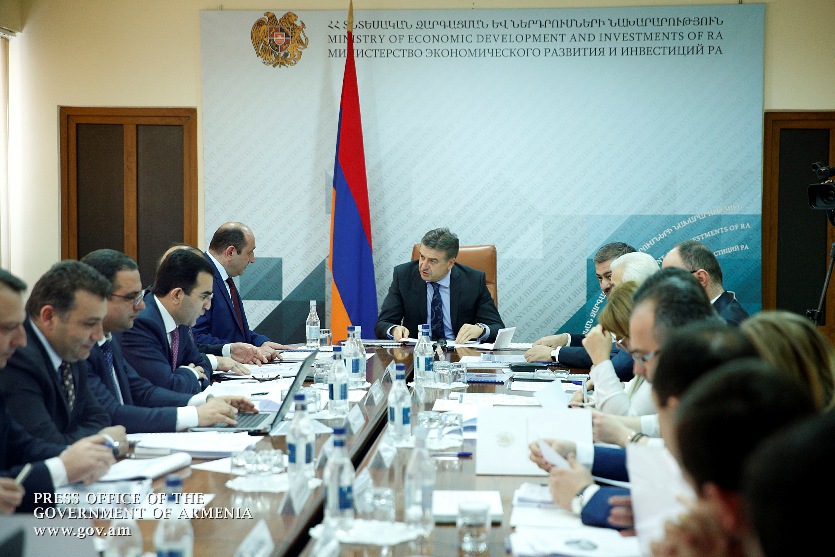 ArmInfo. Armenian Ministry of  Economic Development and Investments expects to increase export  extents in 2017 for $200mln, with growth tendency for $450mln in  2018.Responsible departments stated during the meeting with Armenian  prime Minister Karen Karapetyan within which they discussed economy  fields' development, economic indexes and issues related to  investment involving, business field improvement, current and covered  works and others. ArmInfo was told by the department's press-service.

According to Economy Ministry representatives, the main spheres,  which provide export growth will become metal and headings producing,  beverages, cigarettes, diamonds, jewelry items, consumer goods  manufacturing and pharmaceutical industry. As to export logistic  services the department noted that the work of the company has  started, and the number reached 4. With that, main markets of  potential export growth were defined, EEU, EU, UAE, Iran,  Turkmenistan, China and other countries. Particularly, during  upcoming three years export growth is observed to be provided in Eeu  countries for $400mln, EU for $100mln.

The Head of the Government noted to that "You say export should go  above import extents by 2022? It is a very good statement. But how  will you answer and deal with the situation? If you know that we will  enlarge producing for export, what are you going to reduce from  import?

According to the source, the Premier was noted that annual export  growth should total not less than 20%, and in 2017-2018 in mentioned  areas 15 thousand workplaces are expacted to be opened, the main part  of which will go to consumer goods industry. At that he was informed  that what is to investments and opening new businesses, particularly  in cosumer goods industry, there are already clear forecastst and  corespondent terms. It is expected that in 2018 export extent will go  above $56mln when in 2016 it was forecasted in extent of $12mln.

To note, according to preliminary data of the National Statistical  Service of Armenia, economic activity in Armenia in January-March  2017 compared to January-March 2016 increased by 6.6%. In the  structure of economic activity, the decrease continues in the  construction sector - by 13.6%, the agricultural sector was in  decline by 1.5%. In other areas growth was noted, with the highest in  the industrial sector (16.1%) and trade (11.3%), and slightly more  modest in services (10%) and energy complex (9.3%).