Armenian President is on working visit in border region of Tavush 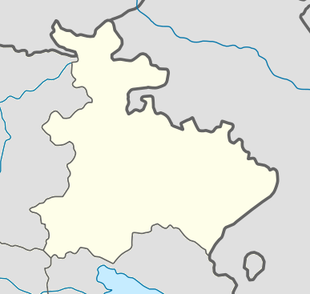 ArmInfo. Armenian President Serzh  Sargsyan is on working visit in Noyemberyan, Berd, and Ijevan of  border  region of Tavush.

As the presidential press service told ArmInfo, The President's visit  began from Koghb military unit where he had a meeting with the  members of inter-agency commission which has been established to  solve issues subjected to coordination in bordering communities. The  meeting was also attended by Tavush governor and heads of several  bordering communities of Noyemberyan. Chairman of the commission,  Defense Minister Vigen Sargsyan and commission members briefed the  President on the works done so far, inventoried issues and their  possible solutions. At the beginning of the meeting Serzh Sargsyan  said he always attached importance to the works at local level which  enable to directly get acquainted with the problems faced by  communities and find solutions, adding that the Government will  assist the communities through all possible measures.

"We have completed the pre-election stage, the elections were held,  and we received our people's vote of trust. Now we together with the  government, state agencies, heads of local self-government bodies.  launch the process of solving our issues. All settlements of our  Republic face problems, and it is obvious that many of them are  similar. They require simiar solutions, but one of the major tasks is  the solution of problems faced by our bordering communities since  these problems are accompanied by constant ceasefire violations which  bring tension on the one hand and cause additional damages to us on  the other hand. In other words, there is a need of additional work.  We have provided sufficient privileges to our bordering communities.  I would like to understand, also to hear from you to what extent  these privileges work, whether they are useful or not, what is the  degree of their usefulness and in general, what more we can do to  justify our compatriots' expectations who stayed in the homeland with  the expectation that situation will change, that we will work more  effectively. Our government is completely ready for practical works  at local level. We would like the local self-government bodies to be  more active and realistic. I am aware that the commission's first  session was held in other region. The Defense Minister told me that,  and I am convinced that this structure can be really useful", the  President said.

He toured the military unit, got acquainted with the combat  readiness, talked to soldiers and encouraged some distinguished  soldiers with gifts.

During the working visit President Sargsyan also attended the  groundbreaking ceremony of 'TUMO Koghb' center in Koghb community.  The event was attended by TUMO founder Sem Simonian, representatives  of Ucom, Koghb foundation, local officials and philanthropists. The  program coordinators said that over 1000 students from Koghb,  Noyemberyan, Berdavan and nearby settlements will attend the  newly-opened TUMO center.

It is also expected to implement TUMO-Army project in cooperation  between the Defense Ministry and TUMO Center for Creative  Technologies, by engaging soldiers of adjacent military unit. The  President also talked to Koghb community residents and the project  sponsors. Then he visited Armath engineering laboratory in Koghb's  main school, got familiarized with the engineering laboratories  establishment program which has been initiatied by the Union of  Information Technology Enterprises (UITE) and Ucom.  The President  also met with students studying at Armath laboratory. The President's  visit in Tavush province continues. He departed for Berd region from  Noyemberyan.