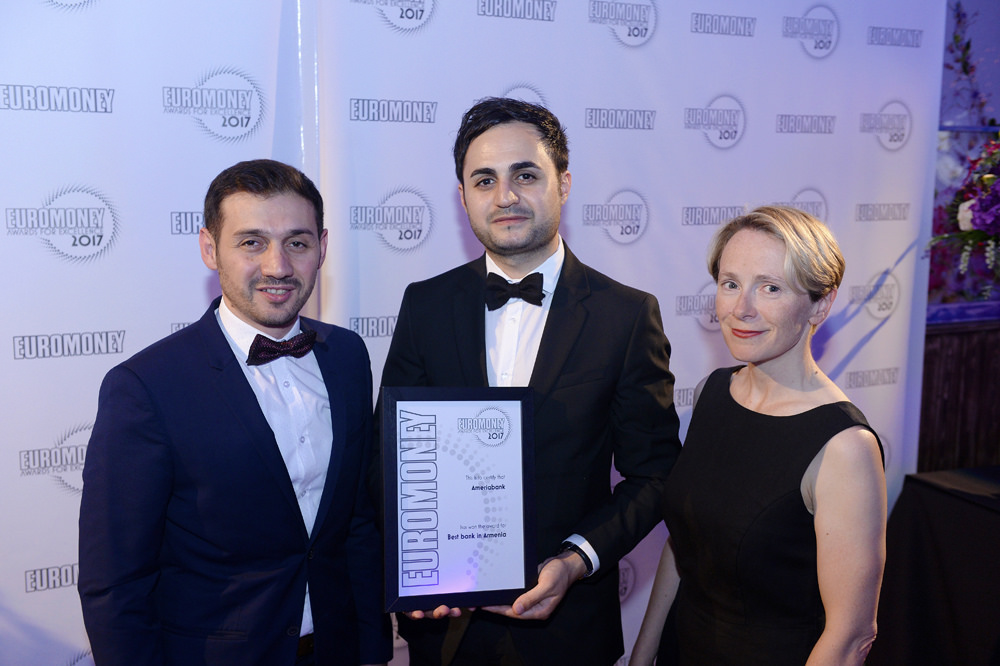 ArmInfo. Ameriabank is awarded  the Euromoney Prize for the fifth time - this time the "Supremacy of  2017" as the best bank of the year in Armenia. As the press service  of Ameriabank told ArmInfo, the current ceremony was held in London  and became the 26th in a row. The award was presented to the  representative of Ameriabank Armen Aslanian and head of the  department for asset management, liabilities and capital Oganes  Khachatryan.

Bank of the year is the Hong Kong HSBC. Among the winners are also  Goldman Sachs, Bank of America Merrill Lynch, Morgan Stanley, Citi  and BNP Paribas. An annual independent monitoring preceded the  decision of the jury. British analysts monitored the financial  performance of banks, their effectiveness, market share growth,  customer attitudes, and at the same time the speed of developing and  implementing innovative products.

To note, the magazine Euromoney is published in London since 1969 and  is considered one of the most authoritative business publications in  the world. Every year it chooses the best organizations in the field  of finance and investment. The winners are determined in three  stages: first they study the annual reports, then they interview the  partners of the bank at home and abroad, after which the experts make  assessments. Not only financial indicators are important, but also  the professionalism of management and personnel, transparency of  transactions, etc. The best banks in the world, the British magazine  Euromoney annually finds in 100 countries - from Argentina to Norway.  The Euromoney Award for Excellence is highly respected - a sort of  financial Oscar. A prestigious annual award is awarded based on the  analysis of the activities of candidates (banks, brokerage and dealer  companies) conducted by financial analysts of Euromoney in more than  100 countries for 26 consecutive years. The "Excellence" award  includes 20 nominations for the banking sector and the capital  market.

To note, previously, the "Excellence" award as the best bank of the  year in Armenia was awarded to Ameriabank from Euromoney in 2011,  2012, 2014 and 2016. Ameriabank is a universal bank that provides  investment, corporate and retail banking services in the form of a  comprehensive package of banking solutions. There are also  distinctive awards: from Global Finance (2016, 2015, 2013, 2012) and  from The Banker/FT (2016, 2015, 2013, 2010). Ameriabank remains  leader in the banking market of Armenia in terms of assets, loans,  liabilities, both on time deposits and on demand deposits. With the  entry of EBRD and concomitant significant infusions, Ameriabank took  the lead both in terms of both general and charter capital. The  bank's shareholders are Ameri Group - 65.8%, EBRD - 20.7%, ESPS  Holding Limited - 13.5%.