GC GeoProMining plans to bring the level of gold mining in Armenia to 5-5.5 tons in the future 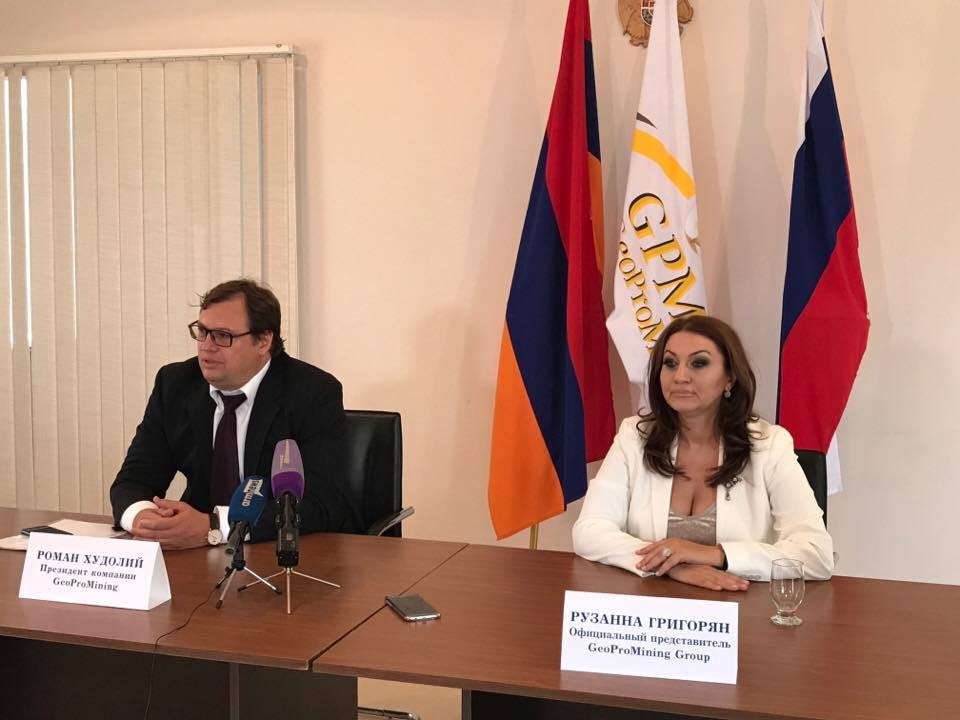 ArmInfo. This year, capital  investments of GeoProMining Group in GPM Gold will amount to about $  10 million, answering the question ArmInfo, the president of the  group of companies GeoProMining Roman Khudoliy said on July 14 at a  press conference.

GeoProMining Gold (is part of the diversified international group of  mining companies GeoProMining - GPM or the Company) has opened a  multimedia classroom in School No.3 of the village of Ararat as part  of the corporate programme supporting educational institutions in  Armenia. Promoting education and supporting local communities in the  regions where the company operates are among the priorities of the  corporate social responsibility programme of GeoProMining "Resources  for Good".

According to GeoProMining President, the group is one of the largest  private Russian investors in Armenia.  In general, the total amount  of investments of a group of companies in Armenia over the past 10  years, taking into account the acquisition of GPM Gold and Agarak  MMK, repayment of debts, purchase of machinery and equipment,  modernization of factories, as well as additional costs, totaled $  504 million.  Social budget The company exceeded $ 8 million, and  payments to the budget of the RA from 2008 to 2016 inclusive amounted  to $ 171 million.

As Khudoliy noted, in 2007 the company acquired GPM Gold, where it  implemented the most modern technology of sulphide ore processing -  Albion. "Today we are the first in the world and so far the only ones  working on this technology," said Khudoliy, noting that only about $  160 million was invested in the plant. At the same time, the number  of employees of GPM Gold increased - 450 persons, having reached 1058  since 2009. And although the plant was launched in 2014, according to  the president of the group, only last year the company GPM Gold began  to reach the planned targets. Since this year, the recovery rate is  already 87%. At the same time, the company does not stop there, plans  are to increase gold production.  This year, the target is 3.8 tons,  while in 2008 the production was only 136 kilograms. In the long  term, it is planned to increase the figure to 5-5.5 tons. According  to the president of the group of companies, the explored reserves of  gold are about 130 tons.

According to Roman Khudoliy, roughly $ 40 million will be needed to  expand the capacity of Agarak Copper and Molybdenum Combine. "It will  be necessary to increase the capacity of the mine, continue to  purchase machinery." It will be necessary to prepare the factory,  additionally increasing the flotation stage, the grinding stage, and  the whole complex Scale, "he explained. As a result of the expansion  of the enterprise, the number of jobs will increase by 200 from the  current 940. At the same time, the capital costs for the  modernization program of the Agarak Copper and Molybdenum Combine  (AMMK) as of today amounted to about $ 30 million. At the moment the  capacity of the factory is 3.5 Million tons of ore. "We expect to  reach 4 million tonnes in the coming years. Now we are preparing a  project to increase the production capacity of the enterprise to 6  million tons. This will allow us not to worry about the market,  because with such low content, Agarak is very sensitive to price  changes, "Khudoliy said.

In addition, as the president of the group informed, at this stage  the project is being developed, and from the next year the  construction of a new mine at the Sotk gold mine will begin.