Mayor of Bird: Stream of guests of the 6th "Festival of honey and berries of Shamshadin" exceeded all expectations 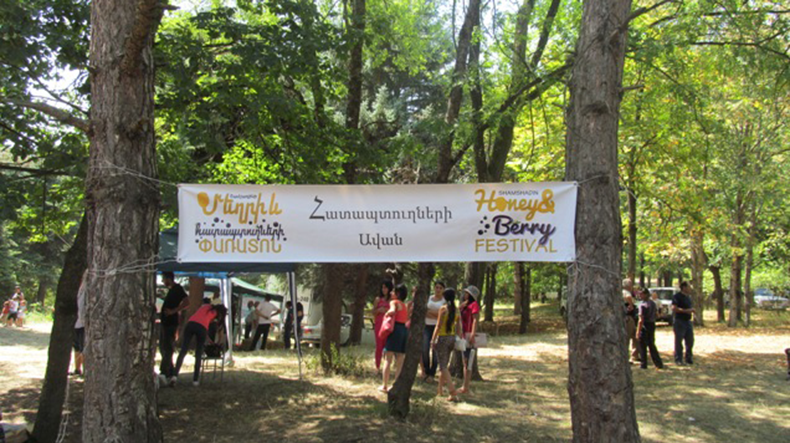 ArmInfo. In the Armenian city of Berd, Tavush region, the 6th "Festival of honey and berries of Shamshadin" was held on August 12 - 13. Lovers of natural honey, sweet berries, as well as jazz music had the opportunity to taste and purchase the products of local beekeepers, as well as drinks made from berries.

According to the director of the fund-organizer of the festival "Spiritual revival of Tavush" Hayk Chobanyan, "Festival of honey and berries in Shamshadin" is a good platform for the development of tourism in the city of Berd, and the entire Tavush region. As Chobanyan noted, in addition to sweet lovers, the festival attracts the attention of businessmen and investors not only from Armenia, but from foreign countries.

The festival traditionally starts with the initiative "Jazz on the Border". This year the guests of the honey and berries holiday were pleased with the "State Jazz Orchestra of Armenia", pleasantly surprised by the representatives of local youth musical and choreographic groups.

During the Festival the contest for the most delicious honey cake was held, and Pastor Aram Mirzoyan delivered a speech and read a prayer in honor of the Assumption Day, held a ceremony of consecrating the grapes.

Mayor of Bird Harutyun Manucharyan proudly noted that the flow of participants of the Festival-2017, in comparison with the previous ones, started several days before the official opening. There were so many guests that the city's hotels simply could not accept all comers, he noted.

The first honey and berry festival was held on August 18, 2012. Beekeepers from the vicinity, village farms, different producers take part in the festival in Berd. Products they represent in small pavilions on the territory of the arboretum "Soran", where about 15-20 tents are located, in which various varieties of flower honey are displayed, as well as fruit crops. In addition, in the pavilions, there are various kinds of souvenirs, samples of wood carvings, handmade products, tapestries. The aim of the festival is to stimulate beekeeping in the region. The event is also aimed at providing the tourist flow to the picturesque places of Tavush.

Shamshadin is the current town of Berd, located on the bank of the Tavush River, at a distance of 202 km from Yerevan, 69 km from the regional center and 10 km from the border. It is located in a favorable climatic zone, the average summer temperature is + 21C. Surrounded by low mountains. Nearby are the ruins of the Tavush fortress of the 10th century, the temples of Varagavanq, Horanashat, here is the cyclopean fortress (I millennium BC) and the museum of Berd. In 2 km there is a church of St. Nshan, also called the temple of Mother Mary. In 2014, a new church of St. Gevorg opened in Berd. From the garden of Surani you can see the city. Here are the Memorial to the victims of the Genocide and the Historical Museum of Berd.