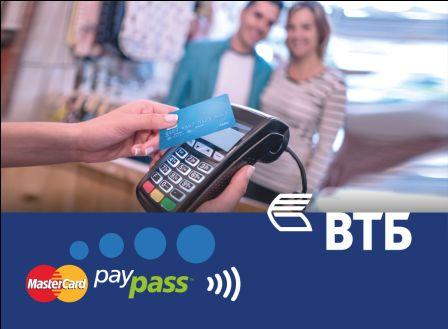 ArmInfo. VTB Bank (Armenia), together with the international payment system MasterCard first in the banking market of Armenia launches Noncontact PayPass MasterCard payment cards.  The press service of the Bank told ArmInfo, by means of contactless cards MasterCard PayPass customers can very simply pay for purchases on the card via POS-terminals equipped with contactless technology.

At this instant purchases are paid in one touch to POS- terminal without wasting time on the introduction of PIN-code (payment less than 10 thousand. AMD, unsigned, etc.). What is noteworthy, the card does not need to be transferred to the cashier to pay for the purchase, i.e. The cardholder fully controls the payment process, thus protecting the data of his card and preventing the risk of possible fraud.

According to the source, contactless cards are less likely to be subjected to mechanical stress, and consequently less wear.

"From now on, all MasterCard cards will be issued by VTB Bank (Armenia) using contactless technology," the Bank said in its official message.

The terminals of the MasterCard contactless payment are located all over the world. In each store and at the service points where the PayPass (wave) logo is present, customers can pay by contactless card. The unique technology of contactless payments PayPass is one of the most modern, fast, affordable and reliable ways of making card payments around the world.

Detailed information on the issue of MasterCard PayPass cards can be found in the branches of VTB Bank (Armenia), on the Bank's website www.vtb.am, or by calling the Bank's Unified Contact Service at 87-87.

To note, till now the contactless payment system Visa cards (payWave), issued by three banks - Araratbank, Ardshinbank and ACBA-Credit Agricole Bank (also on AmEx) were applied in the Armenian market.

According to the 15th issue of the analytical survey "Armenian Banks in the Card Business" prepared by NA ArmInfo, VTB Bank (Armenia) holds the leading position in the plastic market not only in terms of the number of active cards (both general and separately for Visa and MasterCard), but also by the volume of transactions, both general and ATM. So, on April 1, 2017 the bank has about 313 thousand cards, of which more than 56% or 175.6 thousand units is Visa, and the rest almost 44% or 137.4 thousand units- MasterCard. On an annual basis, the bank increased the MasterCard number by 75.3% or by 59 thousand units. The volume of plastic transactions on the cards of VTB Bank (Armenia) for 2016 exceeded 222 billion drams (with an annual growth of 5.7%), of which almost 205 billion drams are ATM transactions (with annual growth of 7.4%). As of April 1, 2017, the bank had 333 own POS terminals and 157 ATMs.  Until 2013, VTB Bank (Armenia) issued and serviced only international VISA cards, after which, starting from September of the same year, becoming a full member of the international payment system MasterCard Worldwide, started issuing and servicing Cirrus/Maestro, MasterCard Standard and MasterCard Gold cards.  Along with this, the bank also serves local ArCa cards. The bank has its own processing. VTB Bank (Armenia) is a full member of the international payment systems VISA International and MasterCard Worldwide.

CJSC VTB Bank (Armenia) became a participant of VTB's international financial group in April 2004. At present, VTB Bank, the second largest in Russia, owns 100% of VTB Bank (Armenia). The Bank is traditionally one of the leaders of the banking system of the Republic of Armenia in terms of key indicators. The coverage of the branch network of VTB Bank (Armenia) has 67 branches with presence not only in the capital, but also in all regions of the country.