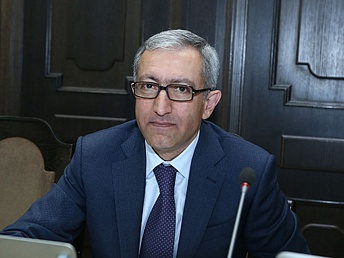 ArmInfo. Minister of Energy Infrastructure of Armenia Ashot Manukyan and Regional Director of the German Development Bank KfW Olaf Zimelka discussed the programs implemented in Armenia with the financing of KfW Bank.As the press service of the Armenian Ministry of Energy informs, during the meeting Ashot Manukyan noted that he highly appreciates cooperation with KfW.

He expressed confidence that further bilateral cooperation will beEffective. "Yerevan attaches particular importance to cooperation with the government of Germany," the minister said, noting that Germany is one of the locomotives of the EU.Olaf Zimelka, in turn, noted that the parties have come a long way. In this connection, according to him, it is already possible to talk about progress in cooperation and next steps.  During the meeting, the parties touched upon the implementation of joint programs and the timing of their implementation. The regional director of KfW expressed readiness to discuss the issues and proposals submitted to determine further steps.Earlier, ArmInfo reported that the German government provided Armenia with credit resources of 82.5 million euros for the implementation of the first stage of the construction of the energy corridor Iran-Armenia-Georgia-Russia. In addition, for bank loans in excess of 100 million euros, 8 electric substations out of 13 on the balance of ZAO "High Voltage Electric Networks" were completely reconstructed earlier. Through the German-Armenian Fund (GAF), KfW provided Armenia with 150 million euros for the implementation of the "Renewable Energy Assistance" program, of which 50 million euros were spent on the restoration of the Vorotan Cascade of HPPs, 64 million euros for retraining specialists and holding seminars. On June 28, during the presentation to the beneficiaries of the GAF program "Promoting renewable energy" financed by the German bank KfW, German Ambassador to Armenia Matthias Kiesler stated that energy was one of the priority areas of cooperation between the two countries, noting that Germany was one of the first to make the transition from Traditional sources of energy to renewable.

Recall that for the implementation of the second phase of the program "Promoting renewable energy", the German bank KfW together with the government of Germany provided loans to the Central Bank of Armenia in 2010 amounting to 18 million euros and a grant of 1.5 million euros. Within the framework of this stage of the program, 14 credits for the amount of 2.9 billion drams, eight of which for the construction of small hydropower stations, and six for the modernization of operating small hydropower facilities, were provided. Prior to this, in November 2004, the Central Bank of Armenia and KfW Bank signed a loan agreement for the "Renewable Energy Development Assistance" program for 6 million euros, and another 1.5 million euros were provided in the form of a grant.Today KfW is one of Armenia's largest donors.  KfW's investments for the past 20 years have exceeded 500 million euros for more than 14 programs, including in the field of SMEs, the agricultural sector, energy complex, the environment and in the financial and banking sector. Armenia's external debt to the Bank on April 1, 2017. Amounted to $ 213.2 million (4.4% of the total external debt of the RA) with an annual growth of 6.4%.