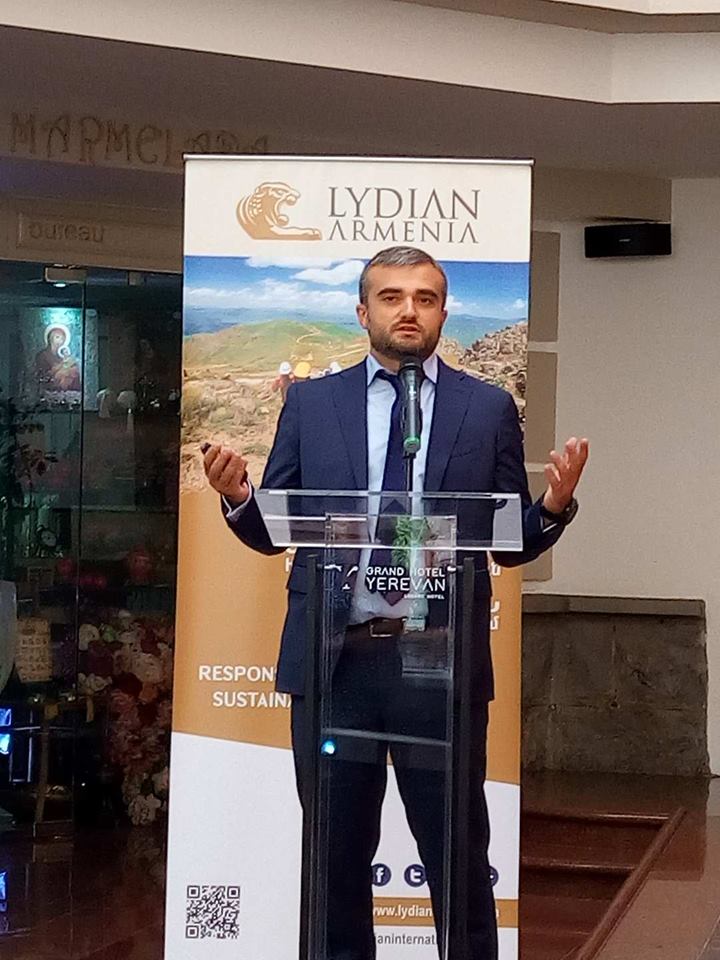 ArmInfo. Lydian Armenia,  which launched the program to operate the Amoulsar gold mine, made a  presentation on August 31, presenting its first annual report on  sustainable development enterprises with the goal of restoring public  confidence in the mining industry. In a welcome speech the company's  general director Hayk Aloyan noted: "Today, the mining sector is  devoid of high confidence. And we intend to win it through an open  and transparent dialogue, responsibility and modernization."

The very presentation was presented by the director of Lydian  Armenian for stable development Armen Stepanyan. So, in his words, in  2016 the company managed to record unprecedented indicators in the  process of acquiring land plots. "A total of 278 private land plots  for a total of $ 296,000 were purchased from 150 registered  landowners," Stepanian said. Speaking about the company's  achievements, he noted that last year a very important indicator was  recorded - involvement in the project of labor from the communities  adjacent to the field. According to him, the company's level in 49%  exceeded the expected level by 20%. According to the presented  presentation, out of 306 people, 150 are residents of the city of  Jermuk, the rural communities of Gndevaz, Saravan and Gorayka.  Answering the question of ArmInfo, he noted that by the end of 2018  the company intends to increase the number of jobs to 1300.

In this regard, he added that as a result of 2016, Lydian Arenian  paid about $ 1.1 million as salaries to its employees. In his  presentation A. Stepanyan drew attention to other financial  indicators. In particular, he said that last year the company paid $  1.5 million in taxes. The cost of payment for services and goods  delivered for the purpose of field work amounted to $ 395 thousand,  and $ 870 thousand in the form of investments were sent to the  adjacent communities.

"Within 10 years of field operation, annual injections in the  country's GDP will amount to about $ 120 million, which is adequate  to 1% of Armenia's GDP, in addition to which $ 65 million in indirect  investments will go to other sectors of the economy," he said.

Stepanian described the work aimed at a 50% reduction in the  frequency of occupational injuries, which currently stands at 1.96%,  as the next steps to be taken. At the same time, he noted the  importance of meeting the requirements of the investors of the EBRD  and IFC project for the implementation of works, revitalization of  the company as part of joining the Extractive Industries Transparency  Initiative (EITI) and membership in the Institute of the  International Code of Cyanide Use (ICMC).

Concerning the creation of the Jermuk National Park A. Stepanian  noted that according to preliminary calculations, the environmental  project will be completed by 2021, and the investment will amount to  about $ 5.7 million.

To recall, Lydian Armenia is a subsidiary of the British Lydian  International, whose shareholders are also major international  institutional investors from the United States, Britain and several  European countries, including IFC and EBRD. The Amulsar project is  the largest industrial project in Armenia today for the development  of the Amulsar gold deposit with a total value of $ 370 million. In  August 2016, a project for the construction and development of the  deposit was launched. Preliminary work has been carried out since  2006. The operation life of the Amulsar deposit will be 10 years and  4 months, annually it is planned to produce an average of 200  thousand ounces of gold (about 10 million tons of ore). The company's  shares are quoted on the Toronto Stock Exchange. The Amulsar deposit  is the second largest in Armenia.