With the assistance of the Stepan Gishyan Charitable Foundation, the Noyemberyan Community Sports School 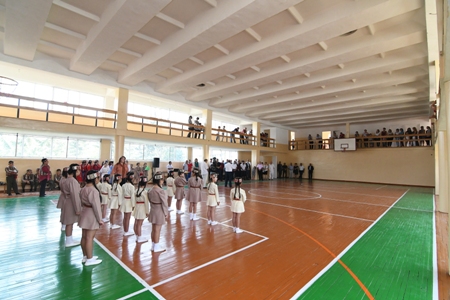 ArmInfo. With the assistance of the Stepan Gishyan Charity Fund, after a major overhaul, the Noyemberyan Sports School opened its doors for young 150 sportsmen from 9 border communities. As the press service of the ACBA-Credit Agricole Bank told ArmInfo, the roof of the sports school was repaired by the efforts of the Noyemberyan regional administration, windows were refurbished, internal finishing works were completed.

In the renovated sports school pupils will be able to learn to play basketball, volleyball, badminton, and children with disabilities will visit chess and checkers clubs.  "130 programs were submitted to the Fund this year. This was a very difficult choice, as there were a lot of applications and all programs were very interesting.

On the selected 4 programs, one was already fully implemented. In the selection of this program, an important point was the joint assistance of the Fund and the regional administration to repair sports school, and the desire and readiness of the regional administration administration to take part in the implementation of the program has become an additional advantage. I am sure that the sports school will bring a big the benefit of the youth of the community both in terms of healthy lifestyles and in terms of leisure activities, "said Anna Gishyan, director of the Stepan Gishyan Foundation, adding that by the end of 2017 the Fund will sum up three more grant programs. The relevant videos are posted in Youtube and Dropbox under the links:

It should be reminded that "ACBA-Credit Agricole Bank" CJSC has been operating in Armenia since 1995. Since September 2006, the largest European bank group Credit Agricole acts as the majority shareholder of the bank S.A. with a 15.56% interest in the capital, after which SJSC "Sacam International" (a member of the Credit Agricole SA group) has a 12.44% interest in participation, along with which there are 10 regional Unions of Peasant Mutual Assistance ). The bank is among the leaders in coverage of the branch network and in the number of regional branches. The bank traditionally leads the way in agriculture, but at the same time it actively finances other sectors of the economy, including leaders and retail lending.