David Lokyan: The volume of own incomes of Armenian communities will grow by 10% 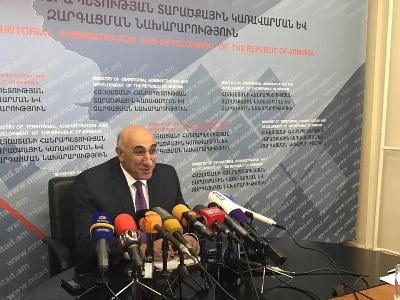 ArmInfo. The volume of Armenia's own revenues, excluding Yerevan, by the end of 2017, compared with the same period last year, will grow by 10% or 3.5 billion drams. This was stated at the press conference by the Minister of Territorial Administration and Development of Armenia David Lokyan on October 10, summing up the results of the annual activity of the department headed by him.

The minister recalled that during the year the Territorial Development and Community Development Strategies were approved, the methodological guidelines for the development of 5-year programs for community development. Based on this, already today all the communities of the country have approved development programs for the next five years. As a result, as of September 31, the income of the Armenian communities, as compared to the same period in 2016, increased by 2.161 billion drams or 9.4%. In addition, he said, 200 communities of the country increased their budget by 20%. 100 communities in 2017 promised to acquire modern playgrounds.  Davit Lokyan said that recently the leadership for the enlarged Armenian communities was also prepared in order to ensure the transition to budget programming. The mechanism of targeted budget programming is planned to be introduced in 2018, indicating specific items of expenditure based on its economic justification and specific expected results for them.

The government has also developed a new motivational mechanism for communities. Already in circulation a new order for the provision of subventions to the communities of the republic. Since 2018, this procedure will stimulate the collection of own revenues and will increase the motivation to create additional values for the whole country. "We propose to the communities to direct the community budget for capital expenditures and express their readiness to add the amount in a double amount if the government approves this development program," the minister explained. Within the framework of this ideology, the executive branch will send subventions amounting to 5-7 billion drams, provided that the financial participation of local communities is commensurate.

As of today, the number of enlarged communities in Armenia has reached 18, according to the results of the year, another 34 such communities are planned to be formed. In general, as noted by David Lokyan, he is pleased with the process, because he believes that it is not a simple arithmetical reduction of the reduction of their number, but the optimization of local management. According to the results of consolidation, as he noted, the "best of the best" will be chosen and the champion community will receive a bonus of 2 million drams in order to increase motivation.