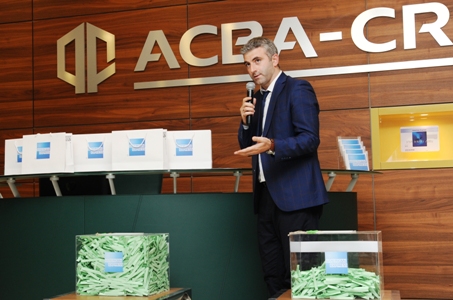 ArmInfo. ACBA-Credit Agricole Bank On October 10, in branch "Armenia" summed up the draw # MYAMEXCARD among American Express cardholders, within the framework of which participants had the opportunity to win 5 phones - iPhone 7.

As the press service of the bank told ArmInfo, the winners were determined according to the scheme of random selection. The owners of the phones were Naira Barseghyan, Lusine Mnatsakanyan, Emi Harutyunyan, Anait Gevorgyan, Arman Arakelyan. Winners of the draw will be able to receive their gifts at the Bank's head office at ul. Arama 82-84.

According to the source, cardholders who took payment transactions from June 10 to September 30 inclusive, photographed the logo of the card or American Express card in the outlet where payment was made on the card, took part in the draw, and then uploaded this photo to Facebook with the title #myamexcard (Public post). In addition, the participants in the drawing were also those users who shared this publication.

CJSC ACBA-Credit Agricole Bank has been operating in Armenia since 1995. Since September 2006, the largest European banking group Credit Agricole SA has been the majority shareholder of the bank with a 15.56% interest in the capital, after which 12.44% of the shareholders of Sacam International (a member of Credit Agricole SA), association with which there are 10 regional Unions of Peasant Mutual Assistance (SLE) in the capital. The bank is among the leaders in terms of coverage of the branch network and subscription of branches. According to the ATM network of ACBA-Credit Agricole Bank, the solution of joint project with "VTB Bank" (Armenia) "Unified ATM network" is leading, in the framework of which the total number of ATMs of two banks as of April 1, 2017 is 334, out of which 164 are installed in Yerevan and 170 in the regions.