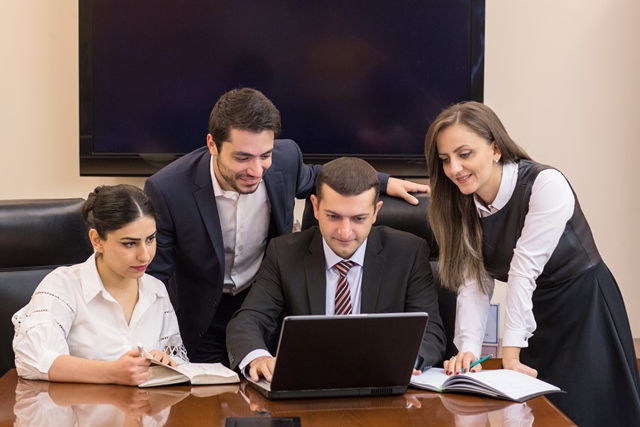 ArmInfo. The team of Ameriabank  reached the final of the 8th international contest "Virtual Banking"  on asset management and liabilities, organized by SimArc NV among  financial and credit organizations. As the press service of the Bank  told ArmInfo, the final round will be held on November 23 in The  Hague.

According to the source, along with Ameriabank, Bancop SA (Paraguay),  Supervielle (Argentina) and Ficohsa (Honduras) came to the finals. 30  banks attended the competition from Africa, Asia, Latin America,  Europe and Central Asia.

The competition is funded by the FMO (Bank for International  Development of the Netherlands), DEG (member of the banking group  KfW) and PROPARCO (French Agency for Financial Development).  SimArc  NV presents new progressive approaches in the financial and credit  sphere, creating great educational opportunities for participants of  this market.

According to the Financial Rating of Armenian Banks as of June 30,  2012, Ameriabank is leading in terms of total capital, assets, credit  investments, liabilities, attracting funds from international  structures. In addition, Ameriabank ranks second in terms of charter  capital, investments in securities, and net profit. The bank takes  the third position on time deposits, both legal and physical persons,  while leading on deposits of legal entities 'access to information  and occupying second place on deposits of individuals' demand  deposits. As of July 1, 2017, the total capital of Ameriabank was  67.8 billion drams, charter capital 39.8 billion, assets 653.3  billion, credit investments 419.9 billion (64.3% of assets),  investments in securities - 67.3 billion (incl. in the state bonds -  58.3 billion), liabilities - 585.5 billion, term deposits - 200.6  billion, demand deposits - 185.4 billion, attracted from  international structures - 154.8 billion drams. The first half- year  Ameriabank finished with a net profit of 3.3 billion drams, with an  annual growth of 55.8%.  Ameriabank is very active in terms of  issuing corporate bonds: at the Nasdaq OMX Armenia stock exchange, 6  issues of Ameriabank bonds are currently quoted - two drams in the  total volume of 2.5bln AMD and four dollars in total amount of $  45mln, and all of them are quoted in the main list of Abond.  (The  calculated exchange rate of the dram as of June 30, 2017 is 480.47  AMD/USD1).

CJSC Ameriabank is a universal bank that provides investment,  corporate and retail banking services in the form of a comprehensive  package of banking solutions. The bank has been operating in the  Armenian market since October 31, 1996. As of July 1, 2017, the  Bank's shareholders are Ameriain Group - 65.8%, EBRD - 20.7% and ESPS  Holding Limited - 13.5%.