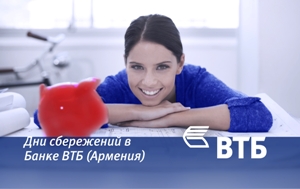 ArmInfo. On the International Day of Savings, VTB Bank (Armenia) launches a special offer for depositors. Within 3 days, from October 31 to November 2, customers of VTB Bank (Armenia) will be able to issue "Favorable" and "Progressive" deposits in AMD at a 0.5% higher rate. According to the press service of the Bank, at the same time, within the framework of the "Autumn Savings" action for AMD deposits, higher interest rates would be applied - up to 10%.

According to the source, "Profitable" and "Progressive" deposits can be issued by individuals and residents of RA for a maximum period of 730 days. When making deposits, the Bank provides customers with a VISA or MasterCard plastic card as a gift.

Detailed information on the special offer can be found in the branches of VTB Bank (Armenia), at www.vtb.am, and also by calling the Bank's Unified Information Service at 87-87.

To note, International Day of Saving is celebrated annually on October 31. This is the official date, fixed by the UN directive in 1989. In 1924, in Milan, the First International Congress of Savings Banks took place, in which representatives of banks from 29 countries of the world took part. In memory of this event on October 31, it was decided to proclaim the World Day of Saving.

To recall, "VTB Bank (Armenia)" JSC became a participant of the international financial group VTB in April 2004. At present, VTB Bank, the second largest bank in Russia, owns 100% of VTB Bank (Armenia).  The Bank is traditionally one of the leaders of the banking system of the Republic of Armenia in terms of key indicators. VTB Bank (Armenia) dominates the coverage of the branch network with 67 branches with presence not only in the capital (23) but also in all regions of the country (44), and the number of regional branches is maintained by leadership.