RA President: there is no matter of Metsamor NPP closing after signing framework agreement with EU 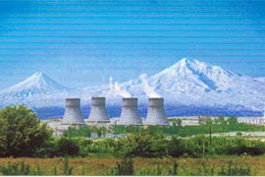 ArmInfo. Discussions about  the closure of Metsamor NPP are artificially initiated, and have  nothing to do with reality. This was stated in an interview to  RIA  Novosti by Armenian President Serzh Sargsyan.

So, the question about the agreement on Armenia's comprehensive and  expanded partnership with the European Union, which is expected to be  signed at the end of November in Brussels within the framework of the  Eastern Partnership summit, contains a clause providing for the  closure of the Armenian nuclear power plant in Metsamor and when that  happens, Sargsyan in particular, said: "In the draft agreement with  the EU, this paragraph was formulated by default (meaning the  objective lifetime of the Metsamor nuclear power plant.) In March  2014, the Armenian government decided to extend the term of  exploitation of the Armenians which will be financed from the Russian  state export credit for $ 270 million and a grant of $ 30 million,  and work is ongoing with the state corporation Rosatom to implement  the program for extending the lifetime of the second power unit of  the nuclear power plant.

It is important to note that the NPP operates in full accordance with  the IAEA criteria, and this is the conclusion of international  specialized agencies. Measures are being taken to improve project and  operational safety, as well as modernization.

So Metsamor NPP will serve until at least 2027. We believe that for  its security, primarily energy, nuclear energy will always be present  in Armenia "

The clarifying question that after the signing of this agreement with  the EU in November can not be a question of its closure, Sargsyan  said: "No, there is no such agreement in the agreement." Earlier, the  draft of the Armenia-EU framework agreement was published, which is  planned to be signed in November as part of the Eastern Partnership  Summit in Brussels. In the part of the agreement on the topic of  nuclear safety, the importance of the high-level observance of IAEA  standards is pointed out. It is also said about the closure and safe  decommissioning of the nuclear power plant in Metsamor and  cooperation on the previously adopted road map or action plan, taking  into account the need to replace nuclear power plants with new  opportunities to ensure Armenia's energy security.

Note that the requirement to close the ANPP is not new for the  Armenian side. Back in 1999, the EU insisted on the closure of the  second power unit of the ANPP by 2003. However, after the relevant  negotiations, an amendment was introduced to this requirement, which  read "until the creation of the appropriate capacity." In 2013, head  of the EU delegation to Armenia Traian Christiea stressed that the  issue of exploitation of the Armenian nuclear power plant is one of  the main issues on the agenda of Armenia-EU relations. In 2014, the  European Commission again urged Armenia to close the nuclear power  plant as soon as possible, as reflected in the European Commission's  report on Armenia in the program of the European Neighborhood Policy.  In 2015, the same Trajan Khristea reiterated that the early closure  of the Armenian nuclear power plant and its decommissioning remained  the main goal of the European Union.  Despite its demands, the EU  continued and continues to provide technical and financial assistance  to the Armenian Nuclear Power Plant, aimed at improving the safety of  the second power unit. According to various estimates, this  assistance varies from 70 to 90 million euros. In addition, the EU  offered 200 million euros for the closure of the ANPP, but the  Armenian side rejected this proposal, considering these volumes  insufficient to ensure the country's energy security.

The Armenian nuclear power plant consists of two units with Soviet  (Russian) WWER reactors. The first unit was commissioned in 1976, the  second - in 1980. In March 1989, after the Spitak earthquake, which  killed 25 thousand people, the station's work was stopped. In  November 1995, in connection with the most acute energy crisis, the  second power unit of the station with a capacity of 407.5 MW was  involved. In March 2014, the Armenian government decided to extend  the life of the second power unit by 10 years - until 2026. The  project is coordinated by the subsidiary structure of the State  Corporation Rosatom - JSC Rusatom Service. Completion of work is  planned for 2019. The Government of the Russian Federation allocated  a $ 270 million state export loan to Armenia and a $ 30 million grant  for these purposes. In March 2015, the Joint Coordination Committee  (JCC) was established to implement the program. So far, there have  been five meetings of the JCC.