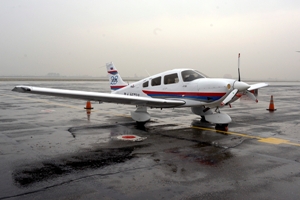 ArmInfo. The first in the region training center for the training of private pilots at the State Administration of Civil Aviation (GDCA) was opened in Yerevan. On November 8, during the press conference, the chief of the State Archives Administration, Sergey Avetisyan, said that the students of the courses will receive a Private Pilot Certificate (PPL) corresponding to the requirements of the International Civil Aviation Organization (ICAO).

According to him, the implementation of this initiative became possible within the framework of the cooperation of the GDCA with the international aircraft building company Piper Aircraft and its official exclusive dealer in the CIS, the company "Simavia".

According to Avetisyan, the cost of training in the center will be about 10 million drams (20 thousand euros). In particular, Avetisyan informed that the 2-month course program provides 104 hours for theoretical studies, 36 hours for ground training and 48 hours for practical classes. Training flights will be carried out by plane Piper PA-28-181 Archer III.

"The opening of the training center is an important event, since it is not just a curriculum, but rather a systematizing measure that will entail the development of various spheres, including public interest in the development of civil aviation and will promote the development of tourism," he said. At the same time, S.  Avetisyan expressed confidence that the project will be in demand both in Armenia and in the region. "In particular, there is already an interest from Russia," he stressed.

For its part, the executive director of the dealer company Simavia Simon Mnoyan  added that in the future, in view of market development, a linear service center for servicing small aircraft will open in Armenia.  "This will be a flight school for the training of private pilots for the Russian, Armenian and other markets of the world.

Thanks to Piper Aircraft, the training center is equipped with appropriate technical equipment, in particular, computer simulators. The courses will be attended by young people who have reached the age of 18. Piper's deputy director for sales Drew Makivan noted that the company is interested in implementing the project in Armenia. He noted that, as a rule, airlines, being interested in training pilots, provide financial support to students.