The FRA has greatly improved its last year`s result for investments and export contracts: the organization reports for the year of its activity. 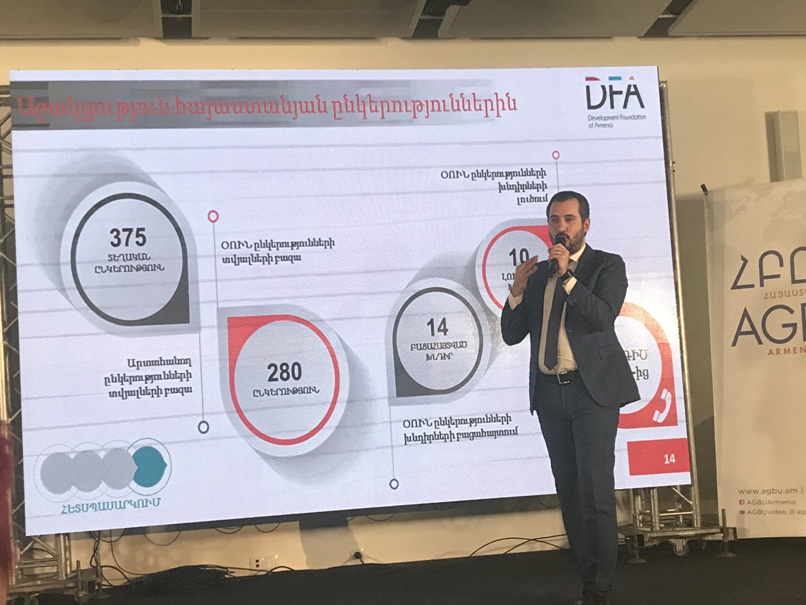 ArmInfo. In 2017, the Armenian Development Fund (ADF) provided foreign direct investment of $ 3.2 million. Investment programs worth about $ 124.5 million are waiting for their turn. In general, the ADFtwice improved its last year's result. This was stated by the ADF Executive Director Armen Avak Avakyan on November 5 at a press conference summing up the results of the annual activity. At the same time, Armen Avak Avakyan refrained from mentioning the names of potential investors, citing commercial secrets and their unwillingness to "shine".

According to Avakyan, 2017 was a turning point for the Fund. During the year, global changes were made in the management of the activities of the FRA in three main areas. First, the mandate of the organization was changed and the growth of tourism in Armenia was removed from the functions of the ADF and transferred to a separate structure, thus, on the shoulders of the fund, with a burden to stimulate exports and inflow of investments. Further, a software platform was created that deals with investment programs - their development, analysis, polishing, and then - in a packaged form - by presenting a potential investor to the court. Based on all the changes, the structure of the organization was revised, and instead of the three main divisions, four were created - program management, marketing, sales and post-maintenance. All these efforts, as the head of the Fund stressed, led to the fact that the results of the activities of the ADF, as a whole, are assessed as positive.  As of today, according to Armen Avak Avakyan, with the support of the Fund of 70 Armenian enterprises of food, shoe and light industry, jewelry business, winemaking, etc. took part in various specialized international exhibitions. As a result, contracts were concluded for the delivery of Armenian products in the amount of 5.391 billion drams, which exceeds last year's figure by more than 249%.

For 10 months of its activity, the ADF attracted investments to Armenia in the amount of $ 15.388 million, last year the figure was zero. Currently in the portfolio of the ADF 29 investment projects worth $ 1 billion 577 million and one competitive program aimed at the development of tourism. The first and major achievement of the Fund, as noted by Avakyan, is the agreement between the Armenian company IDS and the Italian TSD on the construction of a research laboratory and the introduction of high-technology production of forenziki in Armenia. The investment will amount to 10 million euros, he said. In addition, other investments in the sphere of high technologies and tourism are expected.

Meanwhile, the year 2017-th Foundation began its activities with two foreign representatives. To date, their number has reached 33, and most importantly, they all work on a free basis. Such heights, as pointed out by the expert, managed to be achieved by preserving last year's funding of the organization - about 210 million drams in 2016 and about 230 million in the current year. "If last year for each AMD spent, the Armenian economy received 10.7 drams in the form of exports, then in 2017 for the spent AMD Fund provided for the economy of the country 23.8 drams," said Armen Avak Avagyan.