Araik Harutyunyan: The annual economic growth of Artsakh over the past 10 years has averaged about 10% 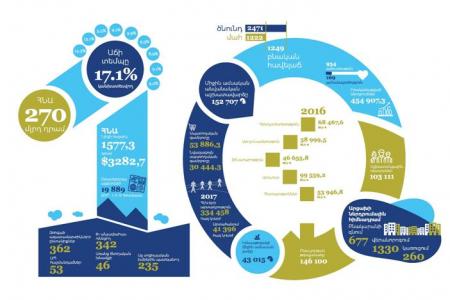 ArmInfo. The annual economic  growth of the Republic of Artsakh for the last 10 years has averaged  about 10%. The state minister of Artsakh Araik Harutyunyan stated  this at a meeting with students and teachers of economic universities  of the country on December 28.

As the head of government pointed out, in one decade the nominal GDP  of the country increased from AMD 70 billion to AMD 270 billion,  providing a 3.8-fold increase. In particular, the volume of  industrial output in 2016 as compared to 2007 (22 billion AMD)  increased 2.7-fold to 59 billion AMD. The growth of the indicator for  the 9 months of 2017 compared to the same period of the previous year  was 57%.