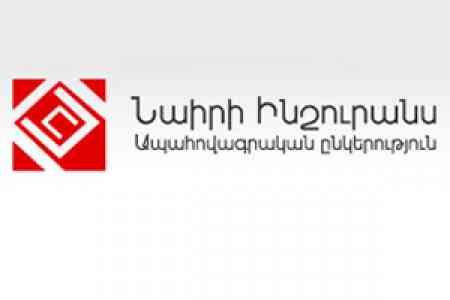 ArmInfo. The Insurance Company   of  Nairi Insurance urges the media not to associate with it and its  founder the situation at Bagratashen customs point, and not to  ascribe to it any actions that do not correspond to reality. This is  the context of the official response of  Nairi Insurance IC to the  request of ArmInfo regarding the reliability of the information   rumored about the monopolistic implementation of auto insurance  throughTop-Spin LLC office located right at at the Bagratashen  customs station.

The content of the official response of SC "Nairi Insurance" is as  follows: "We are informed that Top-Spin LLC, being a registered  insurance agent at  the Central Bank, is one of 479 insurance agent  of  Nairi Insurance and within its agency has legal and a real  opportunity to cooperate with other insurance companies. In addition,   the information regarding  which insurance companies agent the   Top-Spin LLC appears, can be found on the official website of the  Central Bank of Armenia at  https://www.cba.am/am/SitePages/fscfoinsuranceagents.aspx In view of  this, the rumors about monas the opium of SC "Nairi Insurance" in the  person of OOO "Top-Spin" at the Bagratashen customs point are not  true. "

Recall that it is only Top Spin LLC that  permnently works at  the  Bagratashen customs office (TP) , and the remaining insurance agents  implement their activities in  "booths-tents," located on the  approach to the customs unit, which by the decision of the Government  were dismantled at the beginning of this year. Since that moment,  protest rallies began at the Bagratashen customs station, the essence  of which was to deprive the rest of the agents of the opportunity to  carry out auto insurance in this area and refuse to provide them,  like Top-Spin LLC, with TP territory for stationary work. January 9  this year. the protesters, having received no answers to the  complaints submitted before, had already been forced to block this  section of the road, and only by the end of the day the police  managed to persuade them to remove the "blockade" and release the  roadway.

According to the updated ArmInfo, the Bureau of Motor Insurers of  Armenia is already discussing with specific bodies to find ways to  resolve the situation. There is also information that Top-Spin LLC   and other insurance companies offered cooperation.

Note that in the Armenian market there are 6 insurance companies and  about 6,400 insurance agents, 1630 from which are legal entities.   Nairi Insurance IC  has been operating i Armenia  since December  1996, its shareholders are Levon Kocharyan (son of the second  president of Armenia Robert Kocharyan) - 60% and Vahagn Khachatryan -  40%.