North-South is bursting at the seams: Works on Yerevan-Artashat sector restoration is promised to be finished at contractor`s expense 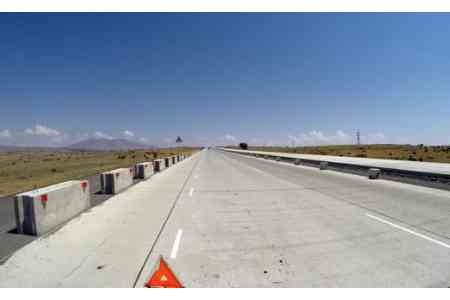 ArmInfo. On the segment of the  transport corridor "North-South" - Yerevan-Artashat, which was  commissioned in late 2015, pits were formed, and in some areas -  cracks.  "The works on the restoration of this section of the highway  will be implemented at the expense of the contractor's company - it  is still in warranty service," Minister of Transport, Communications  and Information Technologies Vahan Martirosyan told ArmInfo on  January 18.

According to the minister, for today it is impossible to say that the  cracks and pits arose due to the poor performance of the contractor -  the Spanish "Corsan Corviam", even if we take into account that the  work, according to the actual estimate of $ 2 million per 1 km. road.  In this issue, as he pointed out, clarity will be on the results of  laboratory analysis. "To this day, according to the available  documentation, there were no shortcomings in the construction,"  Martirosyan said.

Earlier, ArmInfo informed, in the course of Yerevan-Artashat of the  transport corridor "North-South" in July 2017, cracks were found. At  the same time, Vahan Martirosyan stated that the service agreement  with the construction company of the Spanish "Corsan Corviam",  responsible for the 1st and 2nd tranches of the investment program,  was not completed, and the Ministry of Transport demanded  restoration. Meanwhile, the Spanish company became "famous" in  Armenia for its road "construction". It was "Corsan Corviam" in the  summer of 2016, former Prime Minister Hovik Abrahamyan called the  real evil for the North-South.  Abrahamyan stated about the financial  problems of the Spanish company and that the Ararat road is still "in  the problems and made poor".

In 2018, $ 47 million will be spent on the continuation of the  program for the construction of the North- South transport corridor.  The funds will be attracted in the form of loans from the Asian  Development Bank, the European Investment Bank and the Eurasian  Development Bank, another 2.8 billion AMD will be received in the  form of a grant from the European Investment Bank. The main front of  work next year will unfold on the 84 km of the highway, which  provides for laying 40-45 km concrete. The works, in particular, will  be carried out on the road section from the cities of Ashtarak to  Gyumri. As a result, the road from 2 lanes will expand to 4, and  instead of asphalt will be laid concrete.

Meanwhile, at the end of September 2017, Vahan Martirosyan, Minister  of Transport, Communications and Information Technologies of Armenia  reported that according to current calculations, the construction of  the entire 556-kilometer North-South highway stretching from Bavra to  Meghri will cost more than $ 2 billion, since it is only south  section, between the cities Artashat and Meghri, according to  preliminary estimates, will cost $ 1.5 billion. Five years ago, in  September 2012, when the construction of the highway began, the  amount called by representatives of the government of Armenia was  more twice less - $ 962 million. For today, 150.3 million USD and  23.14 million EUR is spent. At the moment, only a 31 km section has  been built and modernized, for which $ 70 million was spent. The rest  was directed to excavation work on the Ashtarak-Talin and  Talin-Gyumri sections. Also, work was carried out on concreting the  road at 11 km. The construction of the corridor was originally  planned to be completed in 2019. Already today it is officially  announced that the terms are postponed for more than 2 years.

Under the "North-South" program, the Armenian government calculated  the preliminary savings of $ 2.5 per hour for each passenger and $ 1  per hour for transporting a ton of cargo. As the authorities of  Armenia expect, the program will allow the country in the future to  mitigate the consequences of the blockade by Azerbaijan and Turkey,  to play the role of a transit state in the freight transportation of  the countries of the region, and also to join the Black Sea ring  highway.