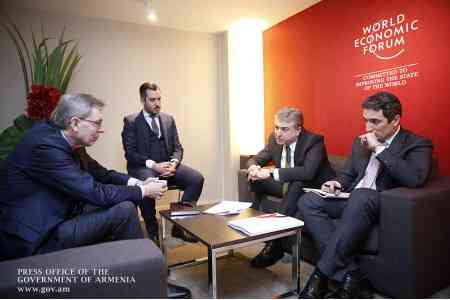 ArmInfo. At the World  Economic Forum in Davos, Prime Minister Karen Karapetyan held a  number of meetings with the heads of large companies.

According to the press service of the government, Karen Karapetyan  held his first meeting with Hans-Paul Burkner, president and CEO of  BCG (Boston Consulting Group,). The company is one of the three  leading consulting companies in the world. During the meeting, the  parties discussed prospects for cooperation between BCG and BCG  Digital Ventures. Karen Karapetyan stressed that Armenia can be  attractive for the company, both from the point of view of  cooperation with it, both with a single country and access to  regional markets. According to the Prime Minister, this is  facilitated by the membership of the republic in the Eurasian  Economic Union, Armenia enjoys the privileges of the EU + GPS +  regime, and with the neighboring Iran a free economic zone has been  created in Meghri, which opens up new opportunities. The  interlocutors discussed the directions of long-term cooperation.  Currently, the company "BCG" is represented in 50 countries around  the world.

During the next meeting with the general executive director of the  VEON group of companies, Jean Yves Charley and the head of external  relations of the company Mark McGhan, the Prime Minister of Armenia  noted that Armenia appreciates the established cooperation with VEON,  expressing hope for the expansion of the company in Armenia. The  interlocutors discussed, in particular, the draft of the digital  agenda, pointing out its importance for the further development of  the country's economy. Representatives of VEON noted that they were  satisfied with the results of the company's activities in 2017, and  the Group's programs will be continued. "We are optimistic about  Armenia and the region and believe that it is becoming more  attractive for foreign investments," Jean-Yves Charlie said, having  informed that he will again visit Armenia in the near future.