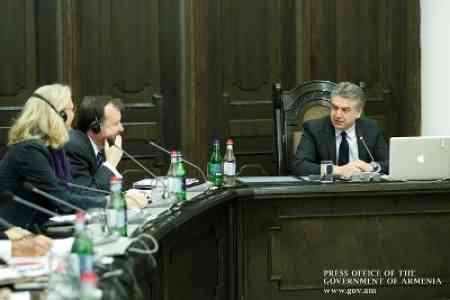 ArmInfo. Under the chairmanship of Prime Minister Karen Karapetyan, a presentation-discussion was held on February 9, dedicated to the cooperation between the Armenian government and the United States Agency for International Development (USAID) with the participation of the United States Ambassador to Armenia Richard Mills and USAID head in the Republic Deborah Grieser.

As the press service of the government told ArmInfo, Karen Karapetyan noted the importance of the country's cooperation with USAID, which has been developing since 1992. At the same time, as the head of the Armenian government pointed out, today's event is a good occasion for exchanging views on what has already been done and in what direction cooperation between the sides should be developed.  Ambassador Mills, in turn, noted that 70% of the US government's assistance to Armenia is carried out through USAID programs and mechanisms. Currently, the Agency in Armenia implements over 30 programs, within the framework of which assistance is provided to reforms in the priority areas for the government of the RA - economy, governance, the judiciary, fighting corruption, etc.

Speaking about USAID programs in Armenia, Deborah Grieser noted that the main goal of the US Agency for International Development is to promote economic growth in Armenia, including through the formation of a favorable business and investment environment, enhancing the competitiveness of priority areas, and developing democracy and a culture of governance. Programs aimed at ensuring economic growth are mainly carried out in the energy, agriculture, IT, water resources, and joint work in the fields of democracy and state administration is aimed at implementing projects in the field of human rights, child protection, development of civil society, struggle with corruption. Deborah Grieser noted USAID's readiness to discuss with the Armenian government further cooperation programs taking into account the development priorities of the RA.

At the end of the meeting, Karen Karapetyan expressed his gratitude to the American partners for the impressive experience of cooperation, thanks to which tangible results were recorded. According to the Prime Minister, important reforms are being implemented in Armenia at this stage, and deepening of interaction with USAID for the republic is of great importance. "We have open partnership relations with the US Embassy in Armenia and USAID, and we are extremely interested in this cooperation," the Armenian government head said, emphasizing that at this stage there are numerous tasks that need to be addressed. As Karen Karapetyan noted, the agenda will always be rich, but it is now the time "to implement interesting, fundamental reforms."