The Ministry of Finance of Armenia expects economic growth in the range of 6.7-7.4% 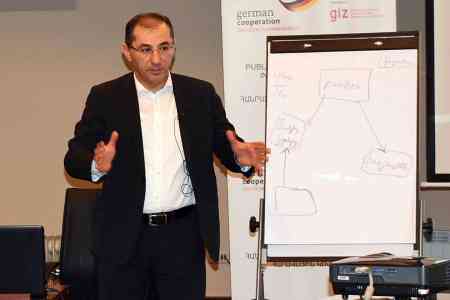 ArmInfo. The Ministry of Finance  of Armenia expects economic growth in the range of 6.7-7.4% in 2017.  This was announced by Armenian Minister of Finance Vardan Aramyan on  February 11 during the seminar "Awareness of Mass Media  Representatives" in Tsakhkadzor, organized with the assistance of the  German Society for International Cooperation (GIZ).

"In March, the National Statistical Service of Armenia will sum up  the final growth results, but for today the good news is that the  economic growth is recorded above the expected level," Vardan Aramyan  said.

As the head of the Armenian Ministry of Finance pointed out, in  general, in 2017, the goals in the context of fiscal policy in terms  of slowing the growth of public debt, ensuring macroeconomic  stability and creating a base for high economic growth rates in 2018  have been achieved. As part of a policy aimed at raising public  welfare, the Ministry of Finance pursued a policy of improving the  macro environment - fiscal policy, and microenvironments, by  improving the efficiency of public finance management. In 2017,  emphasis was placed on the growth of capital expenditures and a  conservative approach was shown with respect to running costs.

In 2017, according to the minister, the Armenian government worked,  firstly, to ensure macroeconomic stability through the implementation  of fiscal policy. The rating agency Fitch reacted positively to the  efforts of the Ministry of Finance, optimistic about the medium-term  prospects of Armenia. The country's financial authorities are  counting on a similar reaction from Moodys.

The second direction, implemented by the Ministry of Finance policy,  was aimed at ensuring that the strengthening of tax administration  did not negatively affect the economy, as its growth, as the minister  stressed, provides the business. According to the head of the  Ministry of Finance, the level of tax collection exceeded the value  set in the budget for 2017 - instead of the envisaged 1,135 trillion.  drams, the amount of tax revenues amounted to 1 156 trillion drams  (excluding VAT), which is 7.3% higher than the annual or 78.7 billion  drams. Of these, about 6 billion drams were formed due to the  collections of the "1000 drams" Fund.  The next goal of the Ministry  of Finance in the past year was to ensure the cost ratio. In 2017,  expenses in a certain sense were exceeded - by about 100 billion  drams. As a result, expenses amounted to 1503.9 billion drams  (1.360.1 billion according to the budget of 2017), compared with  2016, having registered growth of 3.8%. It is important that,  according to Aramyan, the republic has not fulfilled the current  expenditures by 30 billion drams, having shown a restrained approach  to implement this expenditure item of the budget - having decreased  by 1.2% with a parallel increase in capital expenditures by 41.8%.

Despite the successes achieved in 2017, the Minister of Finance urged  not to relax. "If we fixed certain heights in 2017, this does not  mean that we will continue to have a guaranteed growth in future -  for this we need to consistently implement the planned activities in  order to consolidate the achieved result," concluded Vardan Aramyan.