Vahan Martirosyan: From 2010 to 2016 turnover of IT sphere in Armenia increased 5 times 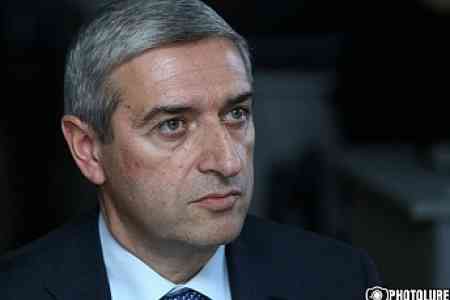 ArmInfo. From 2010 to 2016, the turnover of the IT sphere in Armenia increased 5-fold to $ 510 million, and the number of companies has increased twice, "Minister of Transport, Communications and IT of Armenia Vahan Martirosyan told Emerging Europe. According to him, the sphere of information technologies in Armenia has a high growth potential, and it faces the task of starting to develop expensive technological solutions that will provide the opportunity to create high added value.

"Increasing efficiency and providing targeted solutions to clients should become our main strategy in the coming years," the head of the department said. However, according to him, this is not so simple task, given the fact that 70% of IT companies' revenues come from global market services. "In a country where 2.9 million people live, there are 60 universities, where at least 15 faculties have a fairly strong technological base. Only in 2014-2015 the number of students specializing in technological fields reached 10 thousand, which is 11.7% of the total number of students in Armenia.

In addition, V. Martirosyan said that today Armenia can boast of the presence of engineering laboratories and robot-building laboratories "Armat", which are rapidly growing in schools in all regions of the country.  At the same time, microelectronics and telecommunications are taught in high schools and technical colleges, and with the assistance of leading telecommunications companies, advanced centers have been set up in all schools in Armenia, where computer science is taught. This continues the 100-year tradition of the Yerevan Polytechnic University. "Today's trends in the development of the sphere are impressive and the government is ready to assist in maintaining this trend," concluded V. Martirosyan.

Fragments from the interview with the minister were published on February 8 in an article titled "Armenia Makes Global ICT Push" http://emerging-europe.com/in-brief/armenia-makes-global-ict-push/

According to the National Statistical Service Armenia's IT sector in the end of 2017 reached a 13.6% growth, providing an annual revenue of 269.1 billion drams ($ 557.5 million). According to statisticians, 80.1% of the total volume of IT-sector revenues comes from the services provided. Given the estimated GDP, in 2017 the share of the IT sector was about 5%.