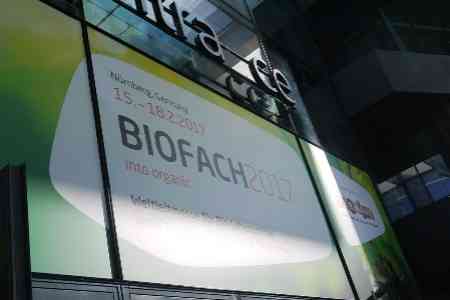 ArmInfo. For the second  year, 10 Armenian producers engaged in organic farming, from February  14 to 17, take part in the leading international exhibition of  organic products "BIOFACH-2018" in Nunberg, Germany.

RA Deputy Minister of Agriculture Armen Harutyunyan stressed that the  development of organic agriculture is a priority for the ministry. In  particular, according to him, numerous programs are being implemented  aimed at providing technical and financial advice to farmers engaged  in organic farming.  "Participation in such an exhibition is another  opportunity to present Armenian organic products. In addition, it is  also useful from the point of view of acquaintance of our producers  with international experience, in particular, with innovations and  tendencies in the development of the sphere, "A.  Harutyunyan said.  According to him, at present the agency is working on the development  of the program "Green Agriculture", which is aimed at developing  organic agricultural production and efficient use of natural  resources.

The EU Ambassador to Armenia Petr Svitalsky, wishing good luck to the  Armenian producers, noted: "The EU believes in the development of  agriculture in Armenia, and in particular organic production. 30% of  Armenia's working population are engaged in agriculture in the  communities. Thanks to the EU assistance, the number of farmers  involved in the organic production of agricultural products has  increased in the framework of the OASI (Organic Agriculture Support  Initiative) program in Armenia.

In turn, the head of the OASI program team David Mukenhuber noted  that last year's participation in the BIOFACH exhibition was quite  effective. In this regard, he said that Armenian producers of  vegetable organic fats and dried berry extracts increased their  export volumes. "We hope that the success in BIOFACH will inspire  other farmers to switch to the production of organic products, which  will make it possible to form a steadily developing agriculture in  Armenia," he added.

According to the source, the participation of Armenian producers is  supported by the Ministry of Agriculture, the EU, the Austrian  Development Agency under the OASI program. The Development Fund of  Armenia and the National SME Assistance Center also act as  promotional structures. And 10 more Armenian enterprises take part in  the exhibition as visitors.

The geography of the international exhibition of organic products  BIOFACH covers 7 global economic markets. This year, 2,790 companies  from 129 countries will take part in the exhibition. Expected more  than 51 thousand visitors, distributors and other interested persons.