Armenia intends to raise the retirement age to 65 years 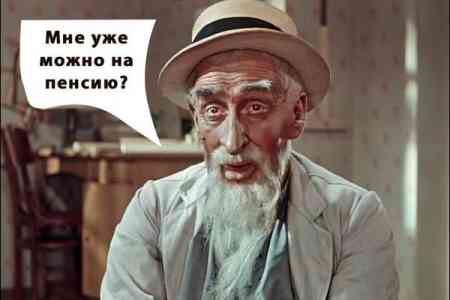 ArmInfo. In the opinion of the  Deputy Minister of Labor and Social Affairs of Armenia Smbat Saiyan,  raising the retirement age in Armenia is inevitable. "Personally for  me, an acceptable option is to increase the retirement age for women  and men under 65," the deputy minister told ArmInfo correspondent.

In general, according to Saiyan, the existing pension system in  Armenia can not solve the task set before it.  To date, as the deputy  minister reminded, 455 609 pensioners are registered in Armenia, plus  those receiving benefits. In sum, the beneficiaries of the system are  520 thousand people. "By and large, when we consider the tasks that  we solve when distributing these funds, we understand that in fact,  nothing is possible to solve: pensions continue to hold at a low  level, the system is inefficient and in the near future in conditions  increasing the number of pensioners, the task will be more difficult  to solve," said Saiyan.

The deputy minister admitted that, perhaps, the best and acceptable  option for the population of the country is to raise the retirement  age, since Smbat Saiyan considers "artificially" to keep the  retirement age at the current level unresolved. According to him, by  2023, as a result of the increase in the number of pensioners in  Armenia, 20 billion drams will be needed to pay pensions more than in  2018. The amount will be about 230 billion drams. According to the  deputy minister, raising the retirement age, the released funds can  be used to address more pressing social problems. It is thanks to  reforms in the pension sector, as Smbat Saiyan noted, non-working  mothers have the right to receive maternity.

The increase in pensions in Armenia was thought back in 1996. As a  result, the retirement age from 55 years for women, and 60 for men,  has been raised to the current 63 years. Meanwhile, the pension and  wages in Armenia have not been rising since 2015. In 2018, the  average working pension in Armenia, according to the draft budget for  2018, will be 39.4 thousand drams, average pension - 41 thousand  drams.  According to those responsible for the sphere, raising the  pension even by a thousand drams would have cost the budget 5 billion  drams, and the budget does not have such funds. This is with the  monthly cost of the minimum consumer basket of 41 thousand drams and  the minimum cost of a food basket of 23 thousand drams, which the  National Statistical Service leads to the 4th quarter of 2017.

According to the Social Security Service of the Ministry of Labor and  Social Affairs, 524 thousand 485 pensioners have been registered in  Armenia today, 460 thousand of them receive a retirement pension (the  basic 16 thousand drams, plus bonuses for experience - 800 drams for  the first 10 years and 500 per subsequent) and 64 thousand - old-age  insurance pension of 16 thousand drams.