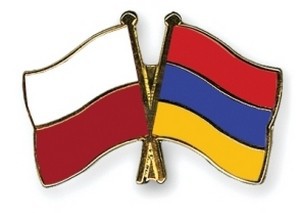 ArmInfo. Polish business shows great interest in making investments in Armenia. The Armenian Co-Chair of the Commission, Deputy Minister of Economic Development and Investments of the Republic of Armenia Hovhannes Azizyan, summarizing the results of the sixth meeting of the Armenian-Polish intergovernmental commission on economic cooperation concluded in Warsaw, the press service of the ministry said.

In particular, as the deputy minister noted, taking into account the peculiarities of the Polish economy, such spheres as pharmaceuticals, information technologies and renewable energy were considered as possible areas of cooperation. The leaders of a number of Polish companies discussed the possibility of organizing joint ventures in such industries as winemaking and household cleaning products. According to Hovhannes Azizyan, the Polish side noted that it regards Armenia as an advantageous platform for entering the markets of Iran and the Eurasian Economic Union, expressing, at the same time, the willingness to provide its platform for the entry of Armenian products to the market of the European Union.

During the meeting, the issue of cooperation in the field of tourism was also raised. The parties noted that in this area the growth of mutual tourist visits has been fixed. In particular, in 2017 there was a 40% increase in the flow of tourists from Poland to Armenia. In this context, the Polish side proposed to organize a study visit to Armenia of the Polish tourist operators and journalists.

Especially the Polish side is interested in the possibilities of inter-regional tourism. Within the framework of the forum, the Armenian side held talks with representatives of the Development Bank of Poland and the Expanded Investment Fund, who agreed to assist those Polish companies that, by making joint investments, organize production in Armenia, providing them with financial resources on preferential terms.

The Ministry of Agriculture of Poland discussed the possibility of creating joint production in Armenia in the areas of animal husbandry and poultry farming, with subsequent export of products to the countries of the EEA, Iran and other countries. Within the framework of the business forum, Polish investors were presented with five main directions for the development of agriculture in Armenia - the creation of greenhouses, intensive gardens, livestock, poultry, organic agriculture and non-traditional vegetable crops and berries.

As a result of the meeting of the commission, a protocol was signed, which defines future directions for cooperation. A memorandum of intent was also signed in the energy sector, according to which Polish companies intend to invest in the wind energy sector.