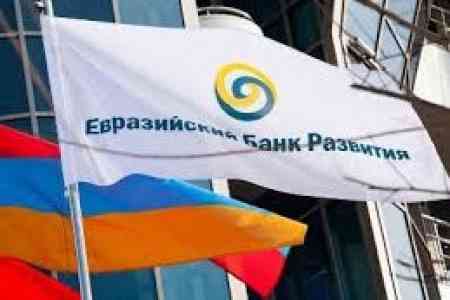 ArmInfo. Fiscal policy will  continue to have a deterrent effect on economic activity in Armenia,  the quarterly macroeconomic review prepared by the EDB Chief  Economist Group says.

The report notes that against the backdrop of the high base of 2017,  economic growth will slow down in 2018 to 3% with a gradual exit to  the potential level in 2019-2020. In the period under review, high  consumer and investment activity will continue to support growth,  given the continuing availability of credit resources and significant  support from remittances from labor migrants. The positive  contribution of exports to GDP growth will be supported by stimulus  measures of the government and growth in demand from the countries -  major trading partners.

However, in 2018, some increase in inflationary pressures is  expected. The increase in domestic demand and further approach of  inflation expectations of economic agents to the target level (4% +/-  1.5%) will stimulate the acceleration of price growth. At the end of  2017, annual inflation reached the lower boundary of the target  corridor by an increase of 2.6% (deflation by 1.1% a year earlier).  Factors of gradual recovery of inflationary processes in 2017 were a  significant acceleration of economic activity in general and consumer  demand in particular, as well as an increase in world prices in  commodity markets. The index of core inflation, taken into account by  the Central Bank of Armenia when making decisions in the field of  monetary policy, significantly accelerated in the fourth quarter of  2017 (an increase of 3.6% in December 2017 by December 2016).

The rapid growth of core inflation caused by the expansion of  domestic demand creates certain risks of exceeding the inflation  target in 2018, which may possibly require the Central Bank to  gradually reduce the stimulus measures of monetary policy:  "Acceleration of inflation may require the Central Bank to gradually  increase the nominal rate refinancing (6% - editor's noted) to  prevent excessive mitigation of monetary conditions and increase  risks of inflation exceeding the target level in the medium term. As  a result, it is predicted that inflation will gradually approach the  target level by the end of 2018. >